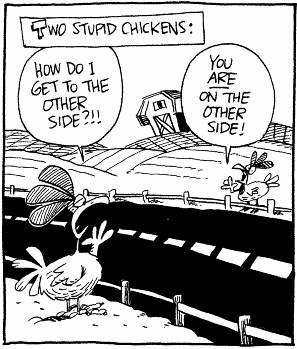 Pelagius: Because the chicken was able to.

John Piper: God decreed the event to maximize his glory. OR . . . it was an act of Christian hedonism. The chicken realized that his greatest joy would only be found on the other side.

Irenaeus: The glory of God is the chicken fully alive.

C.S. Lewis: If a chicken finds itself with a desire that nothing on this side can satisfy, the most probable explanation is that it was created for the other side.

Billy Graham: The chicken was surrendering all.

Pluralist: The chicken took one of many equally valid roads.

Universalist: All chickens cross the road.

Martin Luther: The chicken was fleeing the Antichrist who had stolen the Gospel with his papist lies.

Tim LaHaye: The chicken didn’t want to be left behind.

Rob Bell: The chicken. Crossed the road. To get. Cool glasses.

Joel Osteen: The chicken crossed the road to maximize his personal fulfillment so they he could be all that God created him to be.

Driscoll: A [bleeping] chicken crossed the road to go get a beer.

Gary Demar: The chicken was fleeing the destruction of Jerusalem in AD 70. That’s it.

Jim Wallis: The chicken is an organizer for Occupy Barnyard.

Emergent: For this chicken, its not the destination that’s important. Its the journey itself.

N.T. Wright: This act of the chicken, which would be unthinkable in British barnyards, reeks of that American individualism that is destructive to community.

Al Mohler: When a chicken begins to think theologically, he has no other alternative but to come over to the Calvinist side of the road.

Michael Horton: The chicken was forsaking the kingdom of this world to live solely in the Kingdom of Christ.

John Frame: The chicken had an existential need to change its situation according to a new norm.

T.F. Torrance: The inner logic of the incarnation proved an irresistible draw to the other side of the road.

Dietrich Bonhoeffer: He was abandoning cheap grace for the costly discipleship of risking the dangers of crossing the road.

Karl Barth: The crossing of the road, like all true theology, was done for profoundly Christological reasons. Because Christ came as the judge to be judged, all chickens cross the road in the end.

Paul Tillich: Because he sensed that the other side of the road represented the ground of all being.

New Ager: Because he saw the light beckoning him forward.

Fundamentalist: Because his pastor told him so.

Elevation Church: Because Pastor Furtick told him to get in the line on the other side for a spontaneous baptism.