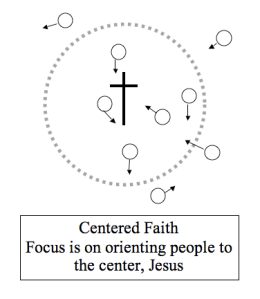 Could it be that our problem with deciding whether Papayya is or is not a Christian has to do with the way we form our mental category “Christian”?

But there are other ways to form categories. A second way is to form centered sets. A centered set has the following characteristics:

c. Centered sets reflect variation within a category. While there is a clear distinction between things moving in and those moving out,[1] the objects within the set are not categorically uniform. Some may be near the center and others far from it, even though all are moving towards the center. Each object must be considered individually. It is not reduced to a single common uniformity within the category.

d. Centered sets are dynamic sets. Two types of movements are essential parts of their structure. First, it is possible to change direction—to turn from moving away to moving towards the center, from being outside to being inside the set. Second, because all objects are seen in constant motion, they are moving, fast or slowly, towards or away from the center. Something is always happening to an object. It is never static.

Illustrations of centered sets are harder to come by in English, for English sees the world largely in terms of bounded sets. One example is a magnetic field in which particles are in motion. Electrons are those particles which are drawn towards the positive magnetic pole, and protons are those attracted by the negative pole. [2]

How would the concept “Christian” look if we were to define it as a centered set?

a. A Christian would be defined in terms of a center—in terms of who is God. The critical question is, to whom does the person offer his worship and allegiance? This would be judged, in part, by the direction a person faces and moves. A Christian has Christ as his God. Christ is his center if he moves toward Christ—if he seeks to know and follow after Christ. From the nature of the centered set, it should be clear that it is possible that there are those near the center who know a great deal about Christ, theology, and the church, but who are moving away from the center. These are the Pharisees. On the other hand there are those who are at a distance—who know little about Christ—but they may be Christians for they have made Christ their Lord. He is the center around which their life revolves.

b. There is a clear division between being a Christian and not being a Christian. The boundary is there. But there is less stress on maintaining the boundary in order to preserve the existence and purity of the category, the body of believers. There is less need to play boundary games and to institutionally exclude those who are not truly Christian. Rather, the focus is on the center and of pointing people to that center.

By recognizing variance, the centered set avoids the dilemma of offering cheap grace to make it possible for the ignorant and the gross sinners to become Christians without lengthy periods of training and testing. Growth after conversion is an intrinsic part of what it means to be a Christian. A Christian is not a finished product the moment he is converted.

Two important dynamics are recognized. First there is conversion, which in a centered set means that the person has turned around. He has left another center or god and has made Christ his center. This is a definite event—a change in the God in whom he places his faith.

But, by definition, growth is an equally essential part of being a Christian. Having turned around, one must continue to move towards the center. There is no static state. Conversion is not the end, it is the beginning. We need evangelism to bring people to Christ, but we must also think about the rest of their lives. We must think in terms of bringing them to Christian maturity in terms of their knowledge of Christ and their growth in Christlikeness. We must also think of the body of believers in terms of their growth over the centuries.

Stress on growth also means that every decision a Christian makes, not only his decision to become a Christian, must take Christ into account. Every decision throughout life moves him towards Christ or slows him down.[3]

If we were to define “Christian” as a centered set, the critical question regarding Papayya is not what he knows (although he obviously needs some knowledge) but has he made Christ his God—does he seek to follow Christ and to know him more fully?

[1] Between A and not A. This is the law of the excluded middle. While it is part of bounded and centered sets, the law does not hold for fuzzy sets.

[2] The turning may take several steps, but there is a definite turning around which is distinct from growth. Note, too, that the stress is on a change in knowledge or action. Knowledge must be acquired, but that in itself is not enough. It is a decision, a change in faith, that is the critical factor.

[3] In centered set terms, one might say that each decision moves a person towards or away from Christ, but that a person remains a Christian so long as he is faced towards Christ. Whether he can or cannot turn back to face away, and therefore lose his position as a Christian, is a theological issue and is not determined by the structure of the category itself.