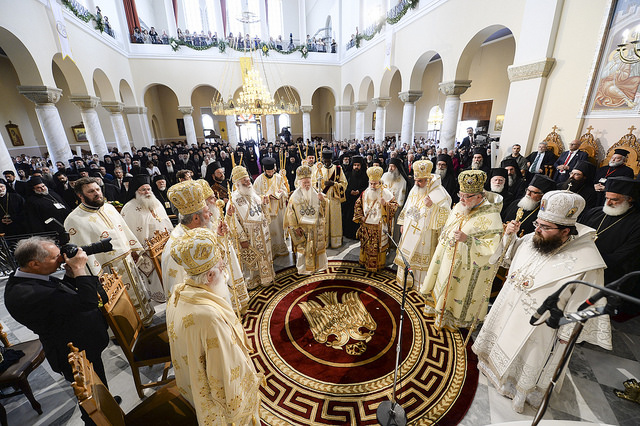 His All-Holiness Ecumenical Patriarch Bartholomew presides over the Orthros and Synodal Divine Liturgy and concelebrates with the Primates of the Local Orthodox Churches at Saints Peter and Paul Church in Chania, Crete. PHOTO: © JOHN MINDALA from Ecumenical Patriarchate on Flickr. Creative Commons license.

Those of us who have great regard for many aspects of the Orthodox Church can this week go back to showing that regard mainly by appreciating and displaying the visual beauties of icons and art work from the Orthodox tradition. We can return to listening to its chants and other sacred music, exploring its devotional practices, and revisiting the history of that part of the Christian Church which, through many centuries, was most exposed to its enemies, whether in the centuries of Ottoman rule or the decades of Soviet Russian strictures. What we can’t do is locate “Stop the press” releases after its Holy and Great Council, which concluded on Sunday, June 26.

Not that “we” were not looking for signs of motion in the Orthodox bloc, or had not been urged and given time to look. While especially metropolitan areas in the West demonstrated evidences of parish vitality and members’ loyalty, Christians and others who were not part of Orthodoxy often found the faithful flocks worshipping and celebrating at some cultural distance from “everybody else.” Not that there was no notice of some recent newsworthy events, beginning with the last-minute move of the Council from Istanbul to the island of Crete. Now and then a news release or a blog spread word of the forthcoming gathering, and a few daring prognosticators foresaw enlivening trends as the various factions in the Church promised to regard others with some favor. But we ended up with little marketable news, or even news of the less-marketable sort noticeable in parishes, seminaries, and the like.

Perhaps onlookers who do not share the inner life of the Orthodox work with a different time-table and set of expectations than do most of the Orthodox. As for my background – around 1964, when Orthodox leadership and the revised Catholicism evident in the Vatican Council were growing friendlier to each other, and more Eastern church folk favored the Ecumenical Movement, many of us showed interest and editorially nudged and urged Western ecumenists to back up, pay attention, learn from, and dialogue with Orthodoxy. Would the pace of change now change? A colleague and I, schooled in mainly Western thought (including what was then called Third World Protestantism and Catholicism), inspired by the promising signs, urged more openness to the Orthodox. So far, so good, and so we editorialized.

But a veteran liberal and progressive ecumenical pioneer, who had often written in support of the Ecumenical Movement, chided  us for our emphasis. He scolded us as “you young fellows!” for looking also for unity in and with the Eastern churches. We protested in question form: Aren’t the Orthodox part of the divided Church that was being called to realize more of the unity that we and our senior critic always thought was integral to Christian church life? In response, he argued that including the Orthodox would slow down ecumenical efforts and—I should mention that he was in his ‘nineties—“then I may not live to see the Church fully united.”

That great man, captive of his own experiences, as we are of ours, might this week have said, “I told you so!” or “You better re-set your internal time-pieces.” Let’s put this do-little Council in temporal perspective. This was the first such conclave in 700 years. Preparation for this attempt to bring together the fourteen independent, “autocephalous” churches, which was the first such ever, had been proposed in 1909, and planning had began in 1961. There were countless negotiations, mini-councils, committee meetings, sacramental and prayer services, and publications along the way.

Still, the biggest bloc on the block, the Russian Orthodox Church (and some allies) stayed home, complaining that there had not been enough time for preparation. How could the various Orthodox elements get ready in a mere fifty-plus (or 700) years? Ecumenical leaders, benumbed but not surprised, counseled patience.

Let this editorialist of 1964 agree with the musing of the senior friend at that time: even without the Orthodox, but especially with the Orthodox, “we may not live to see the day of full Christian unity.” Still, in one of the best evaluations, Jerry Ryan in Commonweal claimed, “nevertheless, there is still reason to be hopeful.”

“Holy and Great Council concludes on the Sunday of All Saints.” Orthodox Church in America, June 26, 2016.

For background: Encyclical of the Holy and Great Council of the Orthodox Church. 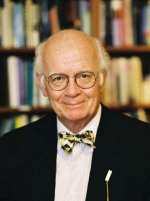 Martin E. Marty is the Fairfax M. Cone Distinguished Service Professor Emeritus of the History of Modern Christianity at the University of Chicago Divinity School. His biography, publications, and contact information can be found at  www.memarty.com.