You’re blessed when your commitment to God provokes persecution. The persecution drives you even deeper into God’s kingdom. . . .  And know that you are in good company. My prophets and witnesses have always gotten into this kind of trouble. —Matthew 5:10,12, The Message

Today Óscar Romero (1917–1980) will be named a saint by the Catholic Church. As Archbishop of San Salvador for the last four years of his life, Romero was a strong, public voice for the many voiceless and anonymous poor of El Salvador and Latin America. When he preached in the cathedral on Sunday mornings, I’m told that the streets were empty and all the radios where on full volume, to hear truth and sanity in an insane and corrupt world.

Here is a man who suffered with and for those who suffered. His loving heart shines through clearly in his homilies:

The shepherd must be where the suffering is. [1]

A Gospel that doesn’t take into account the rights of human beings, a Christianity that doesn’t make a positive contribution to the history of the world, is not the authentic doctrine of Christ, but rather simply an instrument of power. We . . . don’t want to be a plaything of the worldly powers, rather we want to be the Church that carries the authentic, courageous Gospel of our Lord Jesus Christ, even when it might become necessary to die like he did, on a cross. [3]

In his homily on March 23, 1980, the day before he was murdered, Romero addressed the Salvadoran military directly:

Brothers, we are part of the same people. You are killing your own brother and sister peasants and when you are faced with an order to kill given by a man, the law of God must prevail; the law that says: Thou shalt not kill. No soldier is obliged to obey an order against the law of God. No one has to obey an immoral law. And it is time that you recover your consciences. . . . In the name of God, then, and in the name of this suffering people whose laments rise up to heaven each day more tumultuously, I plead with you, I pray you, I order you, in the name of God: Stop the repression! [4]

The next day, following his sermon, a U.S.-supported government hit squad shot him through his heart as he stood at the altar.

Only a few weeks earlier, Romero had said:

I have often been threatened with death. I must tell you, as a Christian, I do not believe in death without resurrection. If I am killed, I shall arise in the Salvadoran people. I say so without boasting, with the greatest humility. . . . A bishop will die, but God’s church, which is the people, will never perish. [5]

Romero’s epitaph reads “Sentir con la Iglesia” (“To be of one mind and heart with the Church”); these words were his episcopal motto, his promise to share the suffering and strength of the people he served.

Blessed Oscar Romero was assasinated 37 years ago. May his memory last forever!

‘Romero, the archbishop of San Salvador, was gunned down in 1980 while celebrating Mass. He had spoken out against repression by the Salvadoran army at the beginning of the country’s 1980-1992 civil war between the right-wing government and leftist rebels.

Francis told journalists traveling home from South Korea that Romero’s case had previously been “blocked out of prudence” by the Vatican’s Congregation for the Doctrine of the Faith but has now been “unblocked.” He said the case had passed to the Vatican’s saint-making office.

The congregation launched a crackdown on liberation theology under then-Cardinal Joseph Ratzinger, fearing what was deemed as Marxist s excesses. The movement holds the view that Jesus’ teachings imbue followers with a duty to fight for social and economic justice.

Francis said of Romero’s case that “it is important to do it quickly,” but that the investigation must take its course.

He declared that Romero “was a man of God”…’

All lyrics contained in this song are the transcribed prayers of Archbishop Oscar Arnulfo Romero (1917-1980). Romero was murdered in 1980 while celebrating mass in a small hospital chapel in San Salvador.

This Monday, 24 March, will mark the 34th anniversary of the assassination of Archbishop Oscar Romero. END_OF_DOCUMENT_TOKEN_TO_BE_REPLACED

The first part of this documentary was published HERE.

He started a revolution without guns, without an army, without fear. Because one man’s courage can be the most powerful weapon of all.
“If they kill me, I will rise in the Salvadoran people.”
Romero is a compelling and deeply moving look at the life of Archbishop Oscar Romero of El Salvador, who made the ultimate sacrifice in a passionate stand against social injustice and oppression in his country. END_OF_DOCUMENT_TOKEN_TO_BE_REPLACED

Part 1 of a half-hour documentary about Salvadoran Archbishop Oscar Romero and the used car salesman from Modesto, California who organized his assassination. Produced, edited, and directed by Daniel Freed. END_OF_DOCUMENT_TOKEN_TO_BE_REPLACED

Following the publication on my blog of the late Archbishop Romero’s last word, I have received the following message from Duane Arnold:

From your website, I thought you might enjoy seeing a music video that we just produced on Oscar Romero. The singer is a deacon, Michael Glen Bell, and the film maker is Owen Thomas (The Elms). The Project is the subject of a three part podcast by Bishop Christopher Coyne of the Archdiocese of Indianapolis which you may link to here.

Click on the image below to go to the video [I have put the link at the top of this blog post]. Feel free to use it on your site, review the album or video, or blog about The Project. If you do, let us know so we can put a link on ours. If you are interested in a story on The Project, please get back to us. We are located in Indianapolis. You can follow us on Twitter @martyrsproject.

God’s reign is already present on our earth in mystery.
When the Lord comes, it will be brought to perfection.
That is the hope that inspires Christians.

We know that every effort to better society,
especially when injustice and sin are so ingrained,
is an effort that God blesses,
that God wants,
that God demands of us. END_OF_DOCUMENT_TOKEN_TO_BE_REPLACED

Servant of God Óscar Arnulfo Romero y Galdámez was a bishop of the Catholic Church in El Salvador. He became the fourth Archbishop of San Salvador. He was assassinated on 24 March 1980. END_OF_DOCUMENT_TOKEN_TO_BE_REPLACED 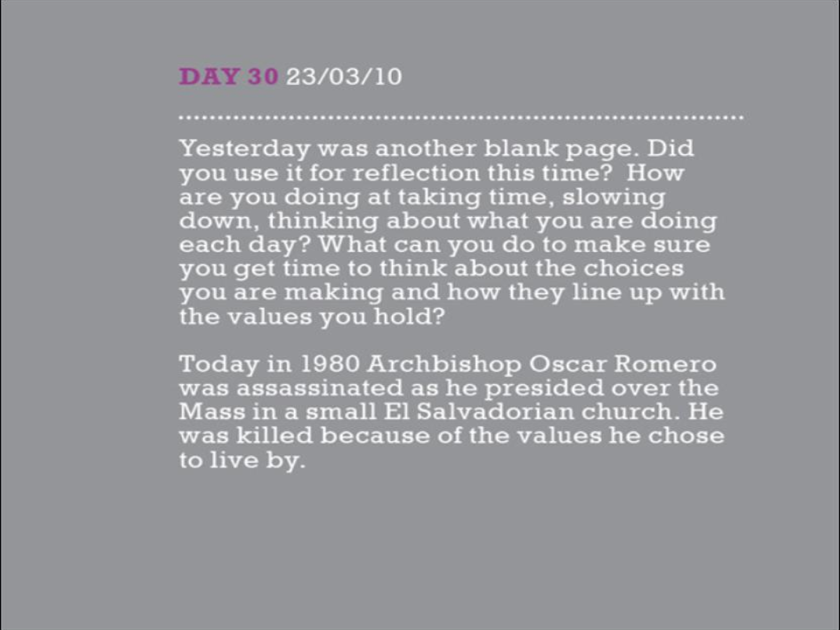 Oscar Romero, Catholic Archbishop of San Salvador, assasinated on 24 March 1980 by a right wing group, because he spoke on behalf of the poor and the opressed. He was declared “Servant of God” by Pope John Paul II.

The need today is for Christians who are active and critical, who don’t accept situations without analyzing them inwardly and deeply. We no longer want masses of people like those who have been trifled with for so long. We want persons like fruitful fig trees, who can say yes to justice and no to injustice and can make use of the precious gift of life, regardless of the circumstances.

(Oscar Romero, The Violence of Love)