In this article Lausanne Global A Editor David Taylor (DT) interviews Os Guinness (IOG) about the charter, its genesis and his hopes for its impact and how Christian leaders will use it.

DT:  What was the impetus and origin of the Charter?

IOG:  Many years ago, I was privileged to help draft the Williamsburg Charter, which was a celebration and reaffirmation of the Religious Liberty Clauses of the First Amendment to the U.S. Constitution.  That, however, was limited to America.  The Global Charter came out of more recent discussions at the EastWest Institute in New York as to what might benefit the whole world in the global era.

DT:  What are the main points of the Charter?

IOG:  It would be impossible to summarize the twenty-nine articles in the Charter.  But essentially they are a reaffirmation and expansion of Article 18 of the Universal Declaration of Human Rights, in light of all the current controversies over religion and public life.  For example, in light of certain misguided Muslim attempts to pass blasphemy laws, the Charter stresses that freedom of conscience is a protection for believers.  It does not protect beliefs.  END_OF_DOCUMENT_TOKEN_TO_BE_REPLACED 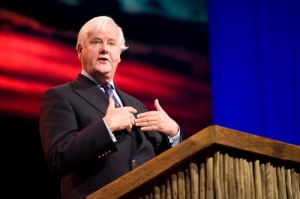 I used to be a fan of Os Guinness, especially in my Schaefferian period. But not anymore.His political an philosophical stances worried me in the last year, as was the case with Chuch Colson, another man I used to admire.

This impression was strengthened when I saw him in person during his interventions at the Lausanne III Congress in Cape Town two years ago. Today he seems to me totally frozen in the modernity project, with no escape.

This particular venture (his latest book, A Free People’s Suicide. Sustainable Freedom and America’s Future) into the dubious concept of America (or, in fact, any other country) as a so-called Christian nation is another proof of that, as you can see in this recent interview published by Christianity Today. Here is the beginning of it.

Many American Christians are ambivalent about their homeland. We are citizens of another kingdom, after all, so sometimes it’s hard to work up enthusiasm for this one. Besides, we’re told the church is called to take a prophetic stance against the culture, pointing out its immorality and injustice. We certainly don’t want to be caught celebrating America—we may be accused of mixing God and country.

Irishman Os Guinness suggests a fresh path to this conundrum in his A Free People’s Suicide: Sustainable Freedom and the American Future (IVP, August). Perhaps we can celebrate the American experiment and hold it accountable to its founding ideals in a way that doesn’t compromise our loyalty to the kingdom of God. CT senior managing editor Mark Galli sat down with Guinness in the Christianity Today offices to explore themes from his latest book. END_OF_DOCUMENT_TOKEN_TO_BE_REPLACED

Among the main speakers at this conference will be Os Guinness, J.I. Packer, Kevin Vanhoozer, Michael Horton, Miroslav Volf and Cornelius Plantinga.