Here are the recordings of the lectures given recently by NT Wright at the Southern Methodist University in Dallas, Tx.

A visual summary of Paul and the Faithfulness of God by NT Wright. In this video, Marlin Watling gives an overview of the key insights from one of today’s finest theologians. Covering the ancient world of Paul, the worldview of the Apostle, his key theological insights, as well as the consequences of his theology towards his world. In 19 pictures you will have a view on 1.700 pages of NT Wright’s theology. END_OF_DOCUMENT_TOKEN_TO_BE_REPLACED

This video features Prof. N.T Wright’s exposition of Romans 5:1-11. This is part of the course Paul and His Letter to the Romans offered by ntwrightonline.org. Part one of this course will be available at a discounted tuition through ntwrightonline.org.

In this video, Dr.N.T.Wright explains what Paul meant by predestination and election and looks at 3 key texts: Romans 8, 9-11, Eph 1.
Full Q&A Session HERE.

The brilliant Anglican theologian, N. T. Wright, in his two-volume study of St. Paul, concludes that we have largely missed Paul’s major theme. After Luther, many thought Paul’s great idea was justification by faith (Protestants) versus “works righteousness” (Catholics). It makes a nice dualistic split that fundamentalists just love. But Wright says it missed Paul’s much more foundational point. He believes the great and supreme idea of Paul is that the new temple of God is the human person. In this insight, he offers us a superb example of thin-slicing the texts and finding the golden thread. Once you see it, you cannot not see it. END_OF_DOCUMENT_TOKEN_TO_BE_REPLACED

N.T. Wright presenting a song whose words he wrote with Francis Collins. A song based, of course, on the song ‘Yesterday‘, by the Beatles.
N.T. Wright was an Anglican bishop and is a leading New Testament scholar. He received his Doctor of Divinity degree from Oxford University and he teaches presently at the University of St. Andrews in Scotland.

NT Wright’s online course on worldviews, together with others, on Galations, and based on his book Simply Good News will be soon available.

You may register at courses@ntwrightonline.org (see details HERE).

I love NT Wright. And I can understand why fundamentalists cannot stand him, in spite of his conservatism.

What does eschatology have to do with ethics? What does the new heaven and the new earth have to do with the world in which we live now? Ultimately, it means that love is not our duty but our destiny. Through God’s grace in our lives, Christians strive to develop habits and character which build them up into the people that God originally created them to be. Christians are not called to merely pray a prayer and forget the rest.

The content of this presentation was turned into a book with the same title, that I highly recommend.

Anglican theologian NT Wright was another Protestant invited by Pope Francis to address the Humanum 2014 gathering at the Vatican. Here is his address, delivered in recorded form.

By the way, if you wondered, although he affirms the biblical complementarity of men and women, as created by God, NT Wright is NOT what is called, with an obvious misnomer,  a ‘complementarian’, which is, in fundamentalist wooden language, the politically correct label for the hierarchical/patriarchal view of the family.

You may find HERE recordings of other addresses at the Humanum 2014 gathering.

This is a two part interview. Here are just a few quotes.

I don’t think I’ve ever said “I am not an inerrantist.” But the controversies which gave rise to that label were strongly conditioned by a shrunken post-enlightenment rationalism, and I would hate to perpetuate that. It’s possible that “inerrancy” is, so to speak, the right answer to the wrong question. It’s a bit like “transubstantiation” in the Middle Ages: if someone asks, “Is Jesus really present in the breaking of the bread?” you have to say “Yes,” but if the only philosophical framework you have for doing so is Aristotle’s metaphysics you will come out with an answer which sends the wrong signals. END_OF_DOCUMENT_TOKEN_TO_BE_REPLACED

I have just found out  from my friend Manu Rusu about an interview by Brendan Robertson on NT Wright’s latest book, to be going on sale on 3 June: Surprised by Scripture. Engaging Contemporary Issues.

Here is the beginning of it:

BR: The first question that we are all wondering is how in the world do you have time and the mental capacity to write so much? You just finished your huge books on Paul and less than a year later, here is another book. How do you do it?

NT: Silly question! I have been lecturing and teaching for many years. As you’ll see in the book, this is a collection of articles and lectures that I have done over quite a long period….

BR: In your new book – Surprised by Scripture – you tackle a number of very controversial topics for evangelicals and Christian in general. One major topic you address is the ordination of women. As far as I know, this is the first major publication that you’ve released that deals with this issue. Why did you feel the need to write about this issue now and why is this issue so important? END_OF_DOCUMENT_TOKEN_TO_BE_REPLACED

Revised People of God and Supersessionism.

Scot McKnight again about NT Wright’s new book on Paul, this time about supersessionism and Paul’s view on Israel.

What did the Creed do to the early Christian beliefs about Jesus?.

Scot McKnight continues his series on NT Wright’s new book on Paul with some comments on Wright’sposition on the creedal dimension of faith, as rooted in Hebrew, not just Greek thinking.

Since the creedal and historical rootedness dimension of the faith is one of the reasons that prompted me to join Anglicanism this interests me to the highest degree.

I wonder what my friend Dr. Eugen Matei thinks about this, as he explores the place of creeds in the history of the Baptist faith(s).

Dr. Michael Bird asks, “This is your magnum opus. What is your main contribution to Pauline studies in this book?”
Find Paul and the Faithfulness of God on Amazon. END_OF_DOCUMENT_TOKEN_TO_BE_REPLACED

NT Wright and the Supersessionism Question: What did Paul do?.

This is clearly going to make some waves among the so-called Christian Zionists.

This is Scot McKnight’s introduction to the forthcoming (1 November) monumental work of NT Wright on the theology of Paul.

My friend Yulia Trufanova, from YWAM, asked me for a good video introduction to Galatians. Here it is, for her and for you. Enjoy!

You may also find HERE the YouTube channel of this project.

I love this. I thank my son, Daniel, for the link.

I am sure the Piper ‘sect’ hates this. Fundamentalists have no sense of humour.

As NT Wright says in a recent interview each generation has to re-examine for themselves the basis of their faith, as each period confronts us with new challenges. Being faithful to Christ in the 21st century is quite different from being faithful, say, in the 3rd, or the 19th century. And, similarly, being faithful to Christ is somewhat different in an ecclesial ministry and in the humanitarian work of, say, World Vision International, even if the principles remain basically the same.

Moreover, when we are called to ‘translate’ the (hopefully) same content of the Gospel into different contexts, we have to clothe it in contextual manner. Michael Green, in his book Evangelism in the Early Church explains in a masterly manner how the gospel preached by Peter to the Jews, in terms of law, sin and forgiveness, becomes in the mouth of Paul, when preaching to pagan Greek the gospel of liberation from the fear of powers and principalities. The essence of the gospel is all there, but the way in which it is communicated is nuancedly different because of the contextual issues it had to respond to.

This truth is also illustrated in a dispute that took place last year, when  a fundamentalist group called Biblical Missiology accused Wycliffe Translators  that they have distorted severely biblical Trinitarian language in their latest translation in Arabic for Muslim contexts. A recent article in The Christian Post  informs us that Wycliffe accepted the conclusions of a report made by an independent panel assembled at their request by World Evangelical Alliance to look into this matter. Wycliffe was, in fact, vindicated in their contextual choices, while the panel also formulated a series of safeguards, in order to help preserve the faithfulness to the original intent, while the biblical message is translated for different cultures. I find this absolutely fascinating; and scary at the same time.

Thanks to Natan Mladin for the link.

John Piper and the Pope: Some Observations.

If you are interested in understanding how the neo-reformed react, from their own narrowly defined bubble, to the way Catholics frame their understanding of redemption, you should read this post by Scot McKnight. 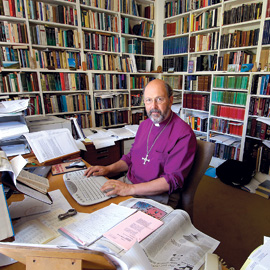 The Read the Spirit website has published last year an interesting interview taken by editor David Crumm to NT Wright on his latest book How God Became King. The Forgotten Stories of the Gospels.

Here are a few excerpts from this dialogue:

DAVID: In writing about your new book, I’m saying that you want to shift the questions that your readers are asking. Most Americans understand that you’re the scholar who says “Yes” to the question: Are the Gospels true? But you really want to talk about: What do the Gospels mean? Am I describing this correctly?

TOM: Yes, that’s a very fair way to make this distinction. One of the targets of this book is Christians who say: Yes, the Bible is true. It’s inerrant and so on. But, then, they pay no attention to what the Bible actually says. For too many Christians it seems sufficient to say Christ was born of a Virgin, died on a cross and was resurrected—but never did anything else in between. I’m saying: That’s not the way to understand the Gospels. END_OF_DOCUMENT_TOKEN_TO_BE_REPLACED

Thanks to my friend Carson Clark for this link.)

Amidst an Affirmation of Women’s Ordination, N.T. Wright Explains Why I’m Not a Progressive (Miniblog #154) | Musings of a Hardlining Moderate.

I can’t agree more with NT Wright. While voting, virtually, as he did on that contentious matter.

A great interview by NT Wright for The Faith Effect, an initiative of World Vision Australia.

You may find HERE a few quotations from this interview.