Source: Women should not teach men what? 1 Timothy 2 in context – Reenacting the Way

Here is some solid biblical teaching on a topic that continues to divide evangelicalism, mostly because of ignorance, patriarchy and ‘holy’ misogyny.

Last night, Sarah Bessey (we’re fans!) began a conversation about the strange, sexist, abusive, and toxic things Christian women are told on a regular basis. We’ve been leaning into the conversation and doing our best to keep a record of the profound and heartbreaking stories women and male allies are sharing. We’ve collected some of the most powerful tweets so far in a list, and we’re inviting our audience to follow the ongoing conversation happening on Twitter under #ThingsOnlyChristianWomenHear.

If you have a relevant story or experience, please join the conversation yourself or share in the comments below.

1. “You can teach the women and children, you just can’t teach the men.” –Charlie Grantham

3. “Women are too emotional to be leaders and pastors. It would never work.” –Jesse Harp END_OF_DOCUMENT_TOKEN_TO_BE_REPLACED

Warning: This is only for people who have a sense of humour. Definitely NOT for fundamentalists and misogynists.

Here are ten solid reasons why NOT 🙂

9. For men who have children, their duties might distract them from the responsibilities of being a parent.

8. Their physical build indicates that men are more suited to tasks such as chopping down trees and wrestling mountain lions. It would be “unnatural” for them to do other forms of work.

7. Man was created before woman. It is therefore obvious that man was a prototype. Thus, they represent an experiment, rather than the crowning achievment of creation. END_OF_DOCUMENT_TOKEN_TO_BE_REPLACED

Note: This text was published on Scot McKnight’s blog on Patheos. I personally did not have the special experience Frye describes here. My ‘conversion’ away from the hierarchical view of gender roles came progressively, mostly because of a hermeneutical shift in my thinking. The greatest obstacle for me was the lack of historical precedents of ordained leadership in the Bible – then I found lady Junia, the Apostle, and the lack of historical precedents in church history – then I realised how history is manipulated by power and misogyny, especially after Augustine. So, I changed. Because of my Marxist past I do not feel comfortable with calling my new position ‘egalitarian’, although I can accept it, if by it we mean equal dignity, and I also believe that ‘complementarity’ is a pretty good way of describing gender roles, if tehse are not rigidly defined and if hierarchy and patriarchy is excluded. It’s complicated, I know. But it is supposed to be so. 🙂

This is the story of my conversion from the hierarchical view of the role of women in home and church to the egalitarian view.

My seminary training landed me exegetically and theologically in the hierarchical camp. I use hierarchical, not complementarian because the nub of the issue is a functional hierarchy. While competing views of the crux interpretum (1 Timothy 2:12 in context) were acknowledged in seminary, a lot of attention was paid to the pronouns in 1 Timothy 3:1-7 with the multiple use of “he.” It was pointed out, of course, that Paul writes “husband of one wife/ one woman man,” so elders [expanded to mean ordained leaders] clearly had to be men. END_OF_DOCUMENT_TOKEN_TO_BE_REPLACED 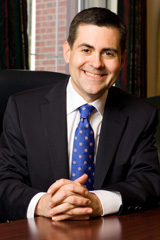 Russell Moore, the ‘ethics’ champion of the Southern Baptists has discovered a new charismatic (!?!) dimension of his fundamentalist faith: exorcism.

In a recent presentation made at a recent national gathering of the Council on Biblical Manhood and Womanhood, Moore, president of the Ethics and Religious Liberty Commission of the Southern Baptist Convention, said that gender is “an issue of spiritual warfare.” He also suggested in this peach that the non-believing world is “a patriarchy of the most pagan kind.” (!!!)

We should, I guess, feel relieved. It is not SBC that is promoting misogyny. It is pagans. And Moore is going to exorcise them. We are safe now! Bot not from SBC, and their fundamentalist ‘hawks’, unfortunately.

See HERE a commentary on Moore’s statements, from Bob Allen, from ABPNews.

Rachel Held Evans is horrified by the misogyny and patriarchalism that dominates the American evangelical culture and she would like o see more of the gifted Christian women on the platforms of Christians conferences in America.

However, because she’s had enough with the question who are these women, she has decided to make the list, so that the evangelical chauvinists have no excuse.

I was happy to find some of my favourites on this list, and some new names that I should pay more attention to.

The Sojourners have published a very insightful article by Catherine Woodiwiss, on a very up-to-date topic: sexual violence in religious contexts.

Here the first part of this text:

Most of us are too familiar with this story: an Upper Midwestern Baptist minister claims that “God made Christianity to have a masculine feel [and] ordained for the church a masculine ministry.” Or a Reformed Christian pastor mocks the appointment of the first female head of the Episcopal Church, comparing her to a “fluffy baby bunny rabbit.” Or a Southern Baptist megachurch pastor in California says physical abuse by one’s spouse is not a reason for divorce. Or numerous young evangelical ministers brag about their hot wives in tight leather pants.

Fewer of us are familiar with this story: Tamar is raped by her half-brother Amnon. Tamar protests her brother’s advances, citing the social code of Israel, his reputation, and her shame, to no avail. Their brother Absalom commands her to keep quiet, and their father, the great King David, turns a blind eye.

What do these contemporary statements above, delivered into cultural megaphones with conviction and certainty, have to do with the Old Testament rape and silencing of Tamar? The difficult answer is, quite a lot. The narrative dominance of these stories rests on power and control, which — whether intentional or not — speaks volumes about whom the church serves and what the church values. END_OF_DOCUMENT_TOKEN_TO_BE_REPLACED

The foolish statement of a Republican candidate, who argued, in the context of the fight against abortion on any conceivable grounds, that victims of ‘legitimate rape’ are rarely, if ever, getting pregnant, stired up heated debates in the US and beyond. And rightly so, as such statements are just another horrible expression of the misogyny that dominates American conservative circles.

Read below an analysis of this matter , by Justin and Lindsey Holcomb, published recently by Christianity Today.

The controversy over the Missouri congressman’s comments gives Christians a chance to understand sexual assault with wisdom and theological depth.

The Missouri Congressman who attends a PCA church said to a St. Louis TV anchor that a woman’s body is capable of preventing pregnancy in cases of “legitimate rape.” He claimed a woman’s body can typically fend off pregnancy during such rape, as he argued against allowing abortions in cases of rape, claiming such pregnancies are uncommon in the first place.