Source: Reflections on Fear and Faith – The Institute of Middle East Studies

Arthur Brown on fear & faith, a constant topic of conversation for Christians living in the Middle East.

This is the third of a 4-part interview of Dr. David G. Benner by Dr. Jackie Stinton, a Calgary-based psychologist and spiritual director. The focus of this part of the interview is on faith and belief.

Yaholo Hoyt is a practical mystic, a passionate writer, a paltry poet, and an old-school Jesus freak. You can find him at http://yaholo.net or read his blog HERE.

Here they are the ‘Five Reasons Christian Parents “Lose” Their Children’, according to the author:

1) Falling into the temptation of using religion to control their children through guilt and shame.

2) The parents seem to be afraid of the world, instead of empowered to live in it.

3) The children do not see the parents drawing any joy from their faith. END_OF_DOCUMENT_TOKEN_TO_BE_REPLACED

Here is the latest issue of Sightings. Lots of insight, indeed.

Fifty-two years ago—can it be?—I published The Infidel: Freethought and American Religion, and have been tracking “the infidel” ever since. Whether he or she was dubbed “free-thinker,” “agnostic,’ “atheist,” “secularist” or many things more, the infidel thrived on the reaction of the “religious” majority. By publishing date in 1961, the infidel had gone off center stage, and scholarly colleagues and I had to ponder what “the religiofication” (as scholar Eric Hoffer called it) of American culture would mean. Infidels not only “went,” from time to time, they “came.” Again.

In recent years opinion surveys, pop culture, and scholarly literature have discovered the unmistakable presence of the current round of “infidels.” The term of choice currently is “the religiously unaffiliated,” a very relaxed term which suggests that “religion”=”affiliation.” Unsatisfied with that big-tent designation, opinion surveyors have helpfully studied and redefined sub-groups in the category. One of the most popular sources finds and names three sub-categories. The American Values Survey (see source at end of this column) looked at the 19% of the population which was “unaffiliated” and found that almost one-fourth of these were “unattached believers,” over one-third were “self-identified atheists and agnostics,” and almost forty percent were simply (well, sometimes maybe complexly) “unaffiliated secular Americans,” not “secularists.” END_OF_DOCUMENT_TOKEN_TO_BE_REPLACED

(Excerpt from the book Bono: In Conversation with Michka Assayas

Bono: My understanding of the Scriptures has been made simple by the person of Christ. Christ teaches that God is love. What does that mean? What it means for me: a study of the life of Christ. Love here describes itself as a child born in straw poverty, the most vulnerable situation of all, without honor. I don’t let my religious world get too complicated. I just kind of go: Well, I think I know what God is. God is love, and as much as I respond [sighs]in allowing myself to be transformed by that love and acting in that love, that’s my religion. Where things get complicated for me, is when I try to live this love. Now that’s not so easy.

Assayas: What about the God of the Old Testament? He wasn’t so “peace and love”?

Bono: There’s nothing hippie about my picture of Christ. The Gospels paint a picture of a very demanding, sometimes divisive love, but love it is. I accept the Old Testament as more of an action movie: blood, car chases, evacuations, a lot of special effects, seas dividing, mass murder, adultery. END_OF_DOCUMENT_TOKEN_TO_BE_REPLACED

Belief in God: UChicago Report Measures Countries With The Greatest Changes in Belief Over Time.

This is a very interesting University of Chicago study of the dynamics of faith in various countries in the world.

The entire report could be read HERE.

Why Doubters and Non-Doubters Share a Common Faith | Christianity Today | A Magazine of Evangelical Conviction.

Mark Galli about faith & doubt. A text worth reading.

Why certainty about God is overrated – USATODAY.com.

Here is another great text about faith and (it’s opposite, i.e.) certainty. This time John Polkinhorne is in the centre of the conversation. Here is an (intriguinging) quote:

‘Polkinghorne doesn’t know for sure that there is a God. And yet, when he was at the top of his game in physics at Cambridge in 1979, he left the laboratory studying one unseen reality for the seminary to study another unseen reality. He became a priest in the Anglican Church. In addition to believing that quarks exist, he believes in a God who is driven by love to continuously create a world that is beautiful. For him, the theories that have God in them work. But he doesn’t really know for sure. And he’s OK with that.’

‘Religious’ vs, ‘spiritual’ and the wonmdering of the young generation.

A discussion by Martin Marty on the uselessness (in terms of reaching the young generation) of some contextualization strategies of contemporary churches.

I would strongly suggest that secularization is not so much an expression of the crisis of faith, as it is one of the crisis of the church (as institutionalized religion), that continues to grow more irrelevant as time goes on. 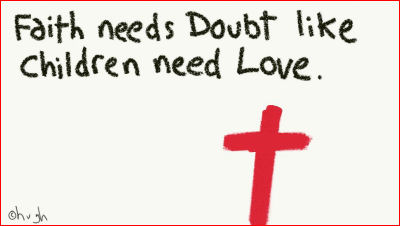 My friend Ady Popa pointed me today to a very interesting article on faith and doubt by Peter Enns, a Protestant professor who studied theology at Harvard. Please find below a few quotes, to wet your appetite.

Warning: this is not for the faint hearted or the naive who are still entertaining the illusions of modernity. END_OF_DOCUMENT_TOKEN_TO_BE_REPLACED

By Mark I. Pinsky

In recent years, some Americans have come to view science and religion as consistent antagonists, butting heads over everything from the origin of the cosmos to when human life begins (abortion) and when it ends (euthanasia).