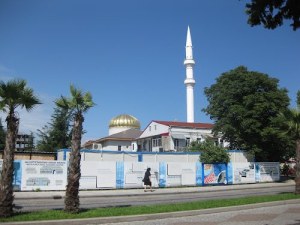 The journey to Batumi was long. It took us about five hours. But it did not take as long as it used to before the motorway was constructed and roads re-done.  I can remember that in early 1990s it took almost twelve (?) hours to get to Batumi. Why did we have to go to Batumi? There were two reasons.

Batumi is the capital city of the Autonomous Republic of Ajara. This part of Georgia used to be a part of the Ottoman Empire for three hundred years, and the majority of the population adopted the Muslim faith. Since the independence of Georgia the Muslims in the republic have experienced the imposition of the Orthodox Christian faith.  Social and religious coercion have been used for the mission among Muslims. Reportedly churches and theological seminaries have been built in the villages and towns were there were no Orthodox Christians. Those who convert to Orthodox Christianity can count on various social and political benefits. The Prime Minister of the country, Zurab Zhvania, encouraged and attended mass baptisms organized by the local Orthodox clergy. Understandably this created tension between the Orthodox and Muslim populations of the country. Recently Ajarian eco-migrants were forbidden to pray together on Fridays in a house set aside for worship.  END_OF_DOCUMENT_TOKEN_TO_BE_REPLACED

‘Christians in Parliament, an official All-Party Parliamentary Group (APPG), chaired by Gary Streeter MP, launched Clearing the Ground – a preliminary report of the committee’s findings into the freedoms of Christians within UK public life.

The inquiry was facilitated by the Evangelical Alliance and the report was published in February 2012.

The Clearing the Ground inquiry was tasked with considering the question: Are Christians marginalised in the UK?

This report reflects the findings and views of the committee and is issued by Christians in Parliament.’