Each winter as Christmas draws closer and the nights darken, Fellows and Junior Members of St John’s College, Cambridge, gather with their friends to hear ghost stories read in the Combination Room.

This year for the first time people all over the world are able to get a glimpse of this magical event by listening to an abridged version of Charles Dickens’ A Christmas Carol read by Professor David Frost, a former Fellow of the college.

A magnificent gallery on the first floor of a building dating back more than 400 years, the Combination Room makes the perfect setting for tales that send a shiver down the spine. Coal fires burn in the massive grates, dozens of candles are lit, and the heavy silk curtains are drawn to create an atmosphere that takes the audience back in time.

For an hour and a half the room falls silent as a series of readers hold their listeners rapt with stories that evoke the mystery and magic of the supernatural. Some of the stories are traditional; others are chosen to introduce the audience to writers with whom they may not be familiar.

As a classic story of redemption on the eve of Christmas, Dickens’ A Christmas Carol, first published in 1843, is one of the all-time favourites. Professor Frost’s wonderful rendition of the characters – particularly the miserly Ebenezer Scrooge and the ghost of Jacob Marley – holds his audience spellbound right to the final words.

The annual readings of ghost stories at St John’s, now in their ninth year, are organised by Patrick Boyde. Formerly Professor of Italian and widely known at Cambridge for his public lectures on Italian art, Professor Boyde is now the College Borderer. In this role, which is unique to St John’s, he stages social and cultural events to integrate the college Fellowship with its graduate students.

There is a long tradition of ghost stories at Cambridge, where some of the best-known British writers have lived, studied and worked. Most famous is MR James (1862-1936), the medieval scholar and writer who studied at King’s College as an undergraduate, later becoming a don and then college Provost. Credited with redefining the ghost story, he wrote stories to be read aloud on Christmas Eve to gatherings of friends.

MR James inspired a number of others to write and publish ghost stories of their own. They include the brothers EF Benson and AC Benson, RH Malden and EG Swain. Swain (1861-1938) was Chaplain at King’s College before taking a living out in the Cambridgeshire fens which formed the setting for his most successful collection of ghost stories.

(Source, here.) You watch at the link below the reading of Dickens’ A Christmas Carol, done by my dear friend, Prof. David Frost, at St John College, Cambridge. Enjoy!

In July 2009 I was in Cambridge for a meeting related to a very important project, called The Way – an adult Orthodox catechism, also known as the ‘Orthodox Alpha’, and visited St. John’s College with Dr. David Frost, a fellow of this College and, at the time, Director of the Institute for Orthodox Christian Studies, at the same university.

Visiting different rooms of the college, where only teachers had access, we started sharing experiences we had during our doctoral studies on providential moments, when the ‘dime dropped’, and we were able to find unexpectedly, on the shelves of academic libraries certain essential materials for the study we did. END_OF_DOCUMENT_TOKEN_TO_BE_REPLACED

Click on the link under the image to watch the lecture.

This is the first presentation I have done on 16 April, 2016, at the Institute for Orthodox Christian Studies (IOCS), in Cambridge, UK, as part of a series of community lectures titled ‘Contemporary Fathers and Mothers of the Church: Guides for Today’s World’.

I concentrate in this first lecture on the spiritual and ecumenical implications of Fr Dumitru Staniloae’s theology.

Many thanks, again, to my dear friend Dr. David Frost, then Principal of IOCS, and to my Romanian friends there, Dr. Razvan Porumb and Fr. Dragos Herescu, for their kind invitation, warm hospitality, and delightful open conversation we had during this event.

You may download at the links below the sketch of Father Staniloae’s life and the text of my lecture. 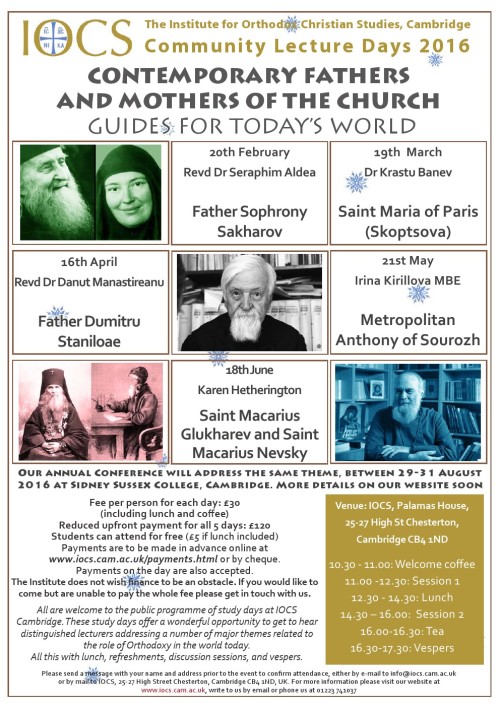 The latest newsletter of the Institute for Orthodox Christian Studies in Cambridge, UK, announces the kind invitation I have received from the Principal of the college, Dr. David Frost, to present on April 16 two open lectures on Fr Dumitru Staniloae, as part of the Community Lecture Days initiative, which explores during the current academic year the theme ‘Contemporary Fathers and Mothers of the Church. Guides for Today’s World’.

This is a real honour, as it comes from an institution and a person that are really dear to me, and I hope it will be an opportunity for reciprocal enrichment. So help us God!

In May 2009, Bradley Nassif, Professor of Theology at North Park University in Chicago visited Romania for the launch of the Romanian translation of the book Three Views on Eastern Orthodoxy and Evangelicalism (J. Stamoolis, (gen. ed.), Grand Rapids, Mi.: Zondervan, 2006), which took place at the University of Cluj. During that visit, Dr. Nassif told me about an Orthodox project that might benefit from any potential support I could provide through the budget I was managing as part of my World Vision responsibilities for the Middle East & Eastern Europe Region, as Director for Faith in Development. The project, formally initiated in June 2004 at the Institute for Orthodox Christian Studies (IOCS) in Cambridge, under the leadership of Professor David Frost, later Principal of the college, was called THE WAY (it took its name from the earliest term by which followers of Christ referred to themselves), and aimed ‘to teach basic Orthodox Christianity as a journey of life, centred on Christ, in terms that communicate to a secular and largely pagan world’. END_OF_DOCUMENT_TOKEN_TO_BE_REPLACED

The Psalms of David – Now as an AUDIO BOOK

A reading by the Principal of the Institute for Orthodox Christian Studies, Professor David Frost, of the complete Book of Psalms (Cambridge Liturgical Psalter version) is now available as an audio book from AUDIBLE, price £14.49, but only £3.99 if you take out membership of Audible. The recording is also available from iTunes and Amazon.

Buying the Cambridge Liturgical Psalter Audio Book is another way you can help IOCS, because for every person who takes out membership and first orders the recording at reduced price, the publisher gets a bounty of $50! Purchase here