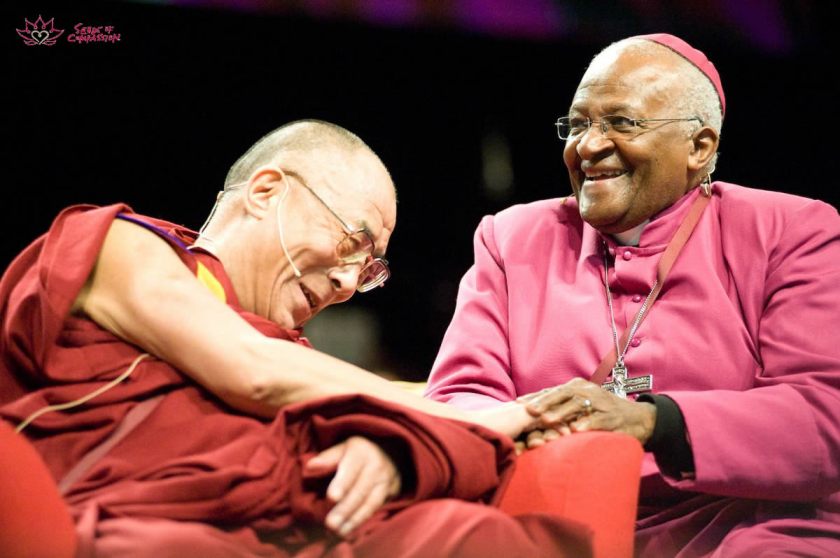 This is an amazing dialogue, between two extraordinary people of our time. You may agree or disagree with some of the things they say, but I guess we may all learn a thing or two from this. Take the time to read it. It is really worh it, I would suggest.

The Dalai Lama, wearing an orange visor, was on stage sitting next to Archbishop Desmond Tutu, who had just flown in from South Africa. The Dalai Lama sat in his usual lotus position on a leather armchair that was a size too small for his folded legs. His knees stuck out a smidgen beyond the armrests.

“My main concern,” he said to Tutu, “what’s the best way to talk about deeper human values like love, compassion, forgiveness, these things. Not relying on God, but relying on ourselves.”

Tutu was hunched forward in his chair; he was carefully examining his hands, which were resting on his lap. He was dressed in a dark suit and a striking purple shirt with a decidedly magenta hue. A large metal cross hung below the clerical collar.

The Dalai Lama said, “I myself, I’m believer, I’m Buddhist monk. So for my own improvement, I utilize as much as I can Buddhist approach. But I never touch this when I talk with others. Buddhism is my business. Not business of other people. Frankly speaking”—he stole a glance at the archbishop and declared firmly—“when you and our brothers and sisters talk about God, creator, I’m nonbeliever.” He laughed, perhaps a little self-consciously. END_OF_DOCUMENT_TOKEN_TO_BE_REPLACED