The Feast of Epiphany marks two different events in the life of Christ: in the West, the Adoration of the Magi, while in the East, the Baptism of Jesus.

However, whatever meaning is attributed to it, it marks, in the liturgical calendar, The end of Christmas season, and the beginning of progressive preparation for the other Christian feast, Easter. 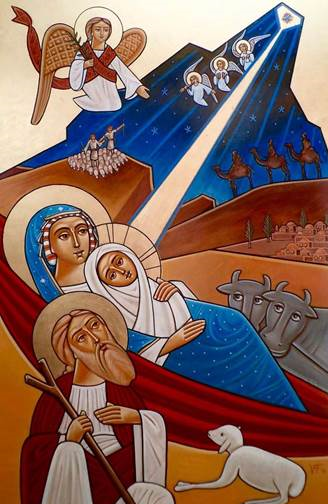 Almighty God, you have given your only-begotten Son to take our nature upon him, and to be born [this day] of a pure virgin: Grant that we, who have been born again and made your children by adoption and grace, may daily be renewed by your Holy Spirit; through our Lord Jesus Christ, to whom with you and the same Spirit be honor and glory, now and for ever. Amen.

END_OF_DOCUMENT_TOKEN_TO_BE_REPLACED

This is one of my favourite Christmas songs. Wonderful words. The entire album is fabulous. 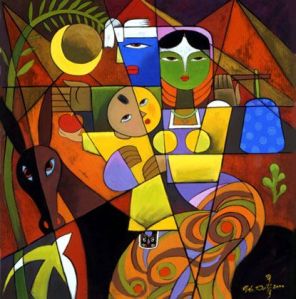 After the scholars were gone, God’s angel showed up again in Joseph’s dream and commanded, “Get up. Take the child and his mother and flee to Egypt. Stay until further notice. Herod is on the hunt for this child, and wants to kill him.”

Joseph obeyed. He got up, took the child and his mother under cover of darkness. They were out of town and well on their way by daylight. They lived in Egypt until Herod’s death. This Egyptian exile fulfilled what Hosea had preached: “I called my son out of Egypt.”

Herod, when he realized that the scholars had tricked him, flew into a rage. He commanded the murder of every little boy two years old and under who lived in Bethlehem and its surrounding hills. (He determined that age from information he’d gotten from the scholars.)

That’s when Jeremiah’s sermon was fulfilled:
“A sound was heard in Ramah, weeping and much lament. Rachel weeping for her children, Rachel refusing all solace,
Her children gone, dead and buried.”

Later, when Herod died, God’s angel appeared in a dream to Joseph in Egypt: “Up, take the child and his mother and return to Israel. All those out to murder the child are dead.” END_OF_DOCUMENT_TOKEN_TO_BE_REPLACED

“The people who walked in darkness have seen a great light; those who dwelt in a land of deep darkness, on them has light shined” (Is 9:1).  “An angel of the Lord appeared to [the shepherds] and the glory of the Lord shone around them” (Lk 2:9).  This is how the liturgy of this holy Christmas night presents to us the birth of the Saviour: as the light which pierces and dispels the deepest darkness.  The presence of the Lord in the midst of his people cancels the sorrow of defeat and the misery of slavery, and ushers in joy and happiness.

We too, in this blessed night, have come to the house of God.  We have passed through the darkness which envelops the earth, guided by the flame of faith which illuminates our steps, and enlivened by the hope of finding the “great light”.  By opening our hearts, we also can contemplate the miracle of that child-sun who, arising from on high, illuminates the horizon. END_OF_DOCUMENT_TOKEN_TO_BE_REPLACED 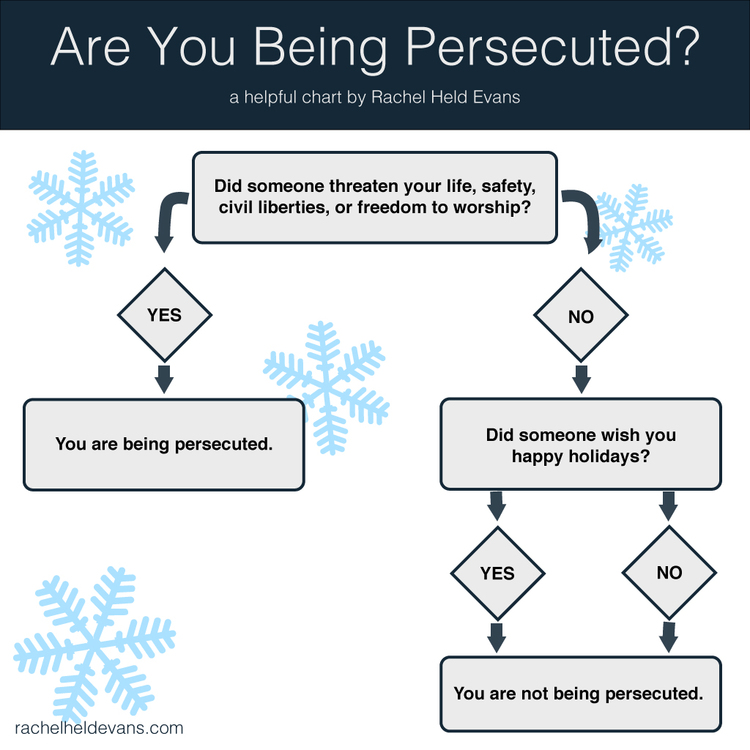 Rachel Held Evans writes again about the fundamentalist paranoia that captures at the end of every year the minds of many American evangelicals (and right wing Catholics alike).

Here is the core of her argument: END_OF_DOCUMENT_TOKEN_TO_BE_REPLACED 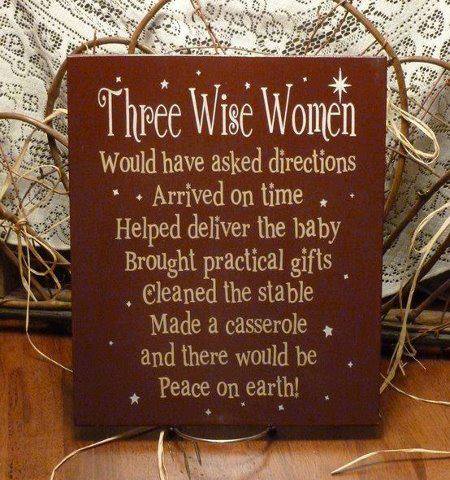 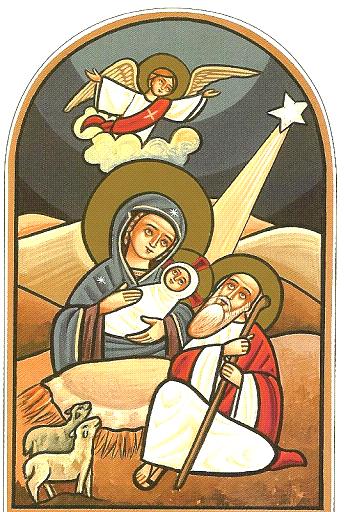 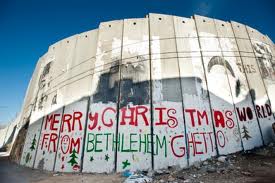 My Christmas card to you all comes at this time from the occupied and wall-surrounded fair town on Bethlehem. As does the olive wood creche below. 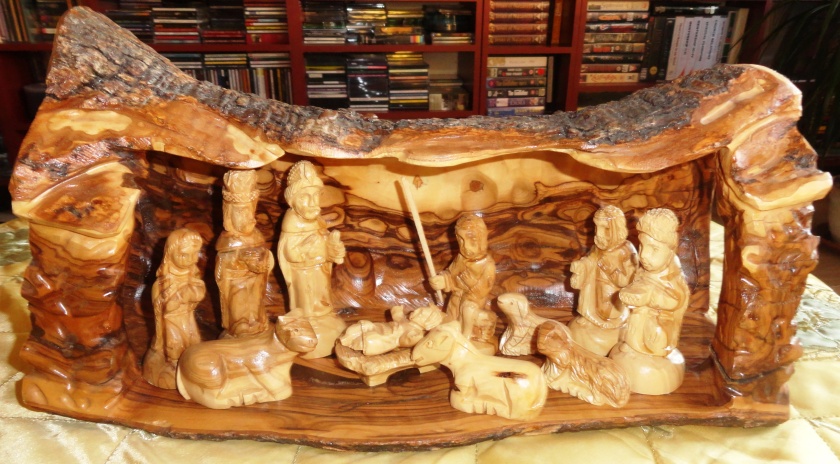 Please say a prayer today for the peace of Bethlehem.

Matthew 2:13-20 [The Message] After the scholars were gone, God’s angel showed up again in Joseph’s dream and commanded, “Get up. Take the child and his mother and flee to Egypt. Stay until further notice. Herod is on the hunt for this child, and wants to kill him.”

Joseph obeyed. He got up, took the child and his mother under cover of darkness. They were out of town and well on their way by daylight. They lived in Egypt until Herod’s death. This Egyptian exile fulfilled what Hosea had preached: “I called my son out of Egypt.” END_OF_DOCUMENT_TOKEN_TO_BE_REPLACED

May you all be blessed with the celebration of the incarnation of God, who became like us in everything, except sin, so that, by grace, we can become like him.

Probably not everybody in Europe is aware of the paranoia of the American Religious Right on the so-called ‘war on Christmas’, which, to be fair, is as pathetic as some secularista obsession with anything smelling religious (except, of course, the ‘secularist religion’). No other agency seems to be more entrenched in their cultural crusade for ‘saving Christmas’ that the (very) right wing TV station Fox News.

Diana Butler Buss points out in this excellent article in The Huffington Post to two problems with the Fox News campaign:

2. they seem to forget that Christmas begins on the eve of 24 December and what the Church celebrates until then is the Advent, which they seem to completely ignore; do they wage a ‘war on Advent’? Or, maybe, the Advent, with its more sober mood, is not so ‘sexy’ for the consumerist agenda of Fox News?

Thanks to Lavinia Gacea for this link.

Thanks to Anna Christie for the link.

Meditations on the Nativity.
Produced by Theosis Productions
for http://www.ancientfaith.com
copyright 2007 All Rights reserved. 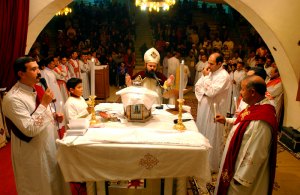 There were the usual chanted liturgies and wafting smells of incense, but church services on Coptic Christmas Eve in Egypt were different this year.

Christians had to park their cars long distances away from their places of worship and pass through extra security cordons just to enter for the customary late-night Mass that begins festive celebrations.

Many wore black to remember the 21 people killed in an attack on their community in Alexandria just five nights before. END_OF_DOCUMENT_TOKEN_TO_BE_REPLACED

(Thanks to Philip Hunt for this.}

They got what they deserved for such a stupid church circus.

This truth was no more apparent than in communist Vietnam this Christmas past! Some of my students led the charge below.

For the last two years authorities in Vietnam surprisingly allowed churches to hold some large public Christmas and Easter celebrations. When these were parlayed into effective evangelistic events, the authorities developed second thoughts. Christians, on the other hand, wanted bigger events. In Saigon they asked for the use of a 30,000-seat stadium. This was denied; a 3,000 seat venue a distance from the city was offered instead. Leaders declined this and were verbally promised a venue for 12,000. But the government refused to give written permission. END_OF_DOCUMENT_TOKEN_TO_BE_REPLACED 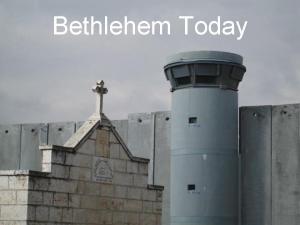 Amidst summer in winter, as temperatures in the last week or so ranged in the upper teens and lower twenties, people in Bethlehem were enjoying an Australia or New Zealand Christmas. In Palestine, the joy of Christmas is usually associated with the overall political and economic situation and with the health standing of family members and not necessarily with the number of gifts one receives. The joy of Christmas is also tied to peace but, needless to say, there is still no peace in the land of Christ’s birth. The prospects for peace, so many times mistakenly heralded by the most powerful leaders do not excite people here anymore. Palestinians are no longer excited by promises and speeches made by prominent politicians to bring about peace and serenity. END_OF_DOCUMENT_TOKEN_TO_BE_REPLACED

Stevie Wonder’s Someday at Christmas is my second best loved Christmas album of all times.

Here is another song from the same album.

This is my favourite Christmas carol of all the Christmas songs ever written. END_OF_DOCUMENT_TOKEN_TO_BE_REPLACED 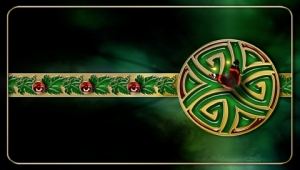 Bob Dylan is one of my favourite simgers. Did you know he recorded a Christmas album this year? It’s called Christmas in the Heart. I just bought it in Dubai. END_OF_DOCUMENT_TOKEN_TO_BE_REPLACED

With the coming of every Christmas, we witness the renewed paranoia of secularist vs. fundamentalist clashes over the presence of overtly Christian symbols in public places. This is true especially in America, but we find similar manifestations in other places in the world.

On the secularist side, people  entertaining the outdated Enlightenment myth of public vs. private truths, would like to impose to everyone their supposedly tolerant views (obviously, tolerance over everything, except convictions of any kind).