People can’t see what they can’t see. Their biases get in the way, surrounding them like a high wall, trapping them in ignorance, deception, and illusion. No amount of reasoning and argument will get through to them, unless we first learn how to break down the walls of bias. . . .

Confirmation Bias: We judge new ideas based on the ease with which they fit in with and confirm the only standard we have: old ideas, old information, and trusted authorities. As a result, our framing story, belief system, or paradigm excludes whatever doesn’t fit.

Complexity Bias: Our brains prefer a simple falsehood to a complex truth.

Consciousness Bias: Some things simply can’t be seen from where I am right now. But if I keep growing, maturing, and developing, someday I will be able to see what is now inaccessible to me.

Comfort or Complacency Bias: I prefer not to have my comfort disturbed.

Conservative/Liberal Bias: I lean toward nurturing fairness and kindness, or towards strictly enforcing purity, loyalty, liberty, and authority, as an expression of my political identity.

Confidence Bias: I am attracted to confidence, even if it is false. I often prefer the bold lie to the hesitant truth.

Contact Bias: When I don’t have intense and sustained personal contact with “the other,” my prejudices and false assumptions go unchallenged.

Cash Bias: It’s hard for me to see something when my way of making a living requires me not to see it.Conspiracy Bias: Under stress or shame, our brains are attracted to stories that relieve us, exonerate us, or portray us as innocent victims of malicious conspirators.

(Brian McLaren, Why Don’t They Get It? Overcoming Bias in Others (and Yourself) (Self-published: 2019), e-book., as quoted by Richard Rohr)

Source: What I Saw in Charlottesville – Brian McLaren

Here is an eye witness report. Really worth reading.

In the tradition of your father, you made some reckless and inflammatory statements to your students the other day.

Just as I appreciate it when peace-loving Muslims, Hindus and others repudiate hostile and reckless statements made by prominent members of their religions, I feel impelled by conscience to repudiate your words as not being representative of authentic Christianity as I, and thousands like me, understand it.

For us, authentic Christianity is the loving, peaceful, justt and generous way of life embodied in Jesus. It is characterized more by self-giving than self-defense, by pre-emptive peacemaking rather than pre-emptive violence.

Your message faithfully represents a longstanding (and ugly) stream of American culture and politics. This tradition goes back to those who argued against the equal human rights and dignity of the Native Peoples and African-American slaves, often abusing the Bible to justify white supremacy under its various guises. END_OF_DOCUMENT_TOKEN_TO_BE_REPLACED 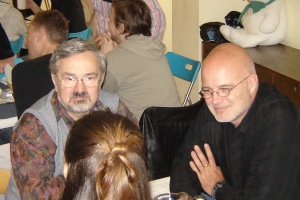 With Brian McLaren, years ago, in Geneva

Stephen Tomkins, from Reform Magazine in the UK has just published a very interesting interview with Brian McLaren. My readers know that I like Brian a lot, even if I do not always agree with him, and I am sure he does not mind that.

Here is the interview, which is worth reading, I would suggest. I know some of those who read this blog do not like McLaren. It is their right, and I am ready to respect it. I hope they do the same with me.

Can you tell me about the faith that you were brought up in?
I was born in a Plymouth Brethren family, so that would probably be considered fundamentalist. Very passionate; a very deep love for the Bible. My father grew up in Africa – his father was a missionary – so very committed.

Looking back does that feel restricted or oppressive to you now?
I’m very grateful for it, for a lot that I got from it, but if my only choice had been to stay or leave, I would have had to leave. When I was 13 my Sunday school teacher said: “You can either believe in God or evolution”, and I remember thinking: “Evolution makes a lot of sense to me.” When I started playing rock ’n’ roll, it wasn’t a great fit – our church didn’t even have musical instruments. There were very tight restrictions on what women could do. There were a lot of things I would never have stayed with. END_OF_DOCUMENT_TOKEN_TO_BE_REPLACED

Some readers on my blog absolutely hate Brian McLaren, or at least deeply detest him, considering him an enemy of faith. I certainly do not share this view. I have met Brian personally and I read some of his books and posts and I have a deep appreciation for him, even if I do not always agree with his view. And probably he does not with some of mine either. Which is perfectly OK.

Here is a post on Rachel Held Evans blog, where her readers ask questions from Brian, and he responds.

So Brian  McLaren’s new book, Why Did Jesus, Moses, the Buddha, and Mohammed Cross the Road? released last week and is already making some waves. The video above provides a nice summary of the book, which I found challenging and  thought-provoking. What I like best about the book is that Brian encourages Christians to nurture an attitude of openness and cooperation toward people of other faiths without compromising Christian identity. So often we feel like we have to choose between openness to others on the one hand and commitment to our own faith on the other. Brian argues that we don’t have to make that choice.

Here is a very powerful indictment by McLaren on the alleged legitimacy of ‘enhanced interrogation techniques’ – a shameful and coward euphemism for TORTURE. I quote:

A growing list of former U.S. government officials, including a president and a vice president, have been working hard to repeat the lie that torture is justifiable as long as the right “we” is doing the torture, and the right “they” are the ones being tortured.

Most recently, a former CIA chief counter-terrorism expert joined the chorus, singing the refrain that “enhanced interrogation techniques” work. In fact, he claims, they were pivotal in finding Osama bin Laden a year ago. END_OF_DOCUMENT_TOKEN_TO_BE_REPLACED

Associated Baptist Press – Opinion: America shall not be exceptional.

In “America the Exceptional,” an article published in the January 2012 issue of Sojourners, I intentionally misquote Genesis 12 as follows:

“And the Lord said to Abraham, I will bless you and make your name great. I will make you a great nation and all nations will submit to your exceptional status. They will kow-tow to your interests, submit to your invasions, and defer to your economic policies. You will act unilaterally and lead, not cooperate with, unexceptional nations. You will use and abuse the alien and stranger among you as you please, for they are not my chosen people blessed by manifest destiny…. For I am the Lord who shows favoritism to whom he will, and you are my chosen people.”

Then I added, “Oops! That is not Genesis 12 — but it might as well have been,” based on projects and attitudes promoted via distorted notions of the theory of American exceptionalism.

Brian McLaren:
“I firmly agree (in an ironic sort of way) with the good Dr. Mohler,” McLaren commented. “I think the conventional Constantinian ‘understanding of the gospel meta-narrative and the Bible’s storyline’ is wrong, misguided, and dangerous. We do in fact need ‘an entirely new understanding’ — new, that is, compared to the status quo, but actually more ancient and primary than the conventional approach. In the process we’d better learn what a meta-narrative actually is and realize that it’s not actually a great label to apply to the gospel. ‘The Bible’s storyline’ is much better. That’s what I’ve been writing and speaking about for the last decade, and hope to keep advocating for and contributing to for the next.”

Brian McLaren, the unofficial spokesperson of the emergent movement is launching tomorrow, 9 February 2009, his new book A New Kind of Christianity. Ten Questions That Are Transforming the Faith. (I presented above the cover of the American version, that I like better than the British one). END_OF_DOCUMENT_TOKEN_TO_BE_REPLACED

I am a loyal supporter of your presidency. I worked hard in the campaign and have never been as proud of my country as I was when we elected you.

I’m writing to ask you to find another way ahead in Afghanistan. I wrote a similar letter to President Bush when he was preparing for war in Iraq.

I believe now, as you and I both did then, that war is not the answer. Violence breeds violence, and as Dr. King said, you can murder a murderer, but you can’t murder murder. As the apostle Paul said, evil must be overcome with good, which means that violence and hate must be overcome with justice and love, not more of the same.