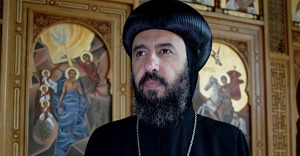 His Grace, Bishop Angaelos of the Coptic Church

Statement by His Grace Bishop Angaelos, General Bishop of the Coptic Orthodox Church in the United Kingdom following the United States State Department declaration of Genocide for Christians, Yazidis, Shiite Muslims and other minorities in the Middle East

We have received very welcomed but unexpected news today from the United States of America, through Secretary of State John Kerry, acknowledging that ISIS “is responsible for genocide against groups in areas under its control including Yazidis, Christians and Shiite Muslims”.

This announcement has come after individuals and organisations in the United States, some of which I have personally worked with, have advocated tirelessly to shed light on this important issue of human suffering and the violation of human dignity. END_OF_DOCUMENT_TOKEN_TO_BE_REPLACED

Now that the dust has settled after the recent In Defense of Christians (IDC) Gala dinner in Washington on 10 September 2014, I feel it is appropriate to comment because of the nature of my work on inter-religious relations and reconciliation in Britain and around the world.

My observation was of a large gathering of people, particularly connected to Iraq and Syria, experiencing very real and personal pain, and had come together to represent relatives either displaced, persecuted, missing, or murdered. In my own address and in my general view as a Christian and a minister I believe there is complete clarity that advocacy must be for all who suffer persecution, Christian or otherwise, and that this is a time for collaboration to this end. END_OF_DOCUMENT_TOKEN_TO_BE_REPLACED

The freedom to choose and practice one’s faith is a fundamental right for all under international law, and yet we continue to see numerous tragic cases around the world in which that same right is non-existent, and exercising this freedom is punishable, sometimes even by death.

As Christians we believe that all are created in the Image and likeness of God, with His Image intrinsic to our human nature, which lays the foundation for respect and love for all. Within this nature, we believe that all have been given the freedom to choose and live according to those choices, and while freedom of religion is one choice that is central to the lives of millions across the world, it continues to be widely violated.

As recently reported by Amnesty International, Meriam Yahia Ibrahim Ishag is a Christian Sudanese woman in Sudan who was sentenced “to death by hanging for ‘apostasy’” after refusing to renounce her Christian Faith and convert to Islam, although she has lived as a Christian since her childhood. Meriam, who is twenty seven years old and is eight months pregnant, was reportedly also sentenced to “flogging for ‘adultery’” because her marriage to a Christian man is considered unlawful. This, among other cases, sheds light on the intensity of the struggle facing so many around the world who strive to merely practice their faith. END_OF_DOCUMENT_TOKEN_TO_BE_REPLACED