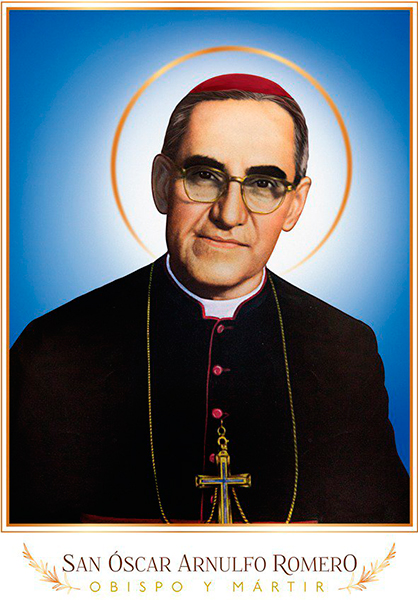 You’re blessed when your commitment to God provokes persecution. The persecution drives you even deeper into God’s kingdom. . . .  And know that you are in good company. My prophets and witnesses have always gotten into this kind of trouble. —Matthew 5:10,12, The Message

Today Óscar Romero (1917–1980) will be named a saint by the Catholic Church. As Archbishop of San Salvador for the last four years of his life, Romero was a strong, public voice for the many voiceless and anonymous poor of El Salvador and Latin America. When he preached in the cathedral on Sunday mornings, I’m told that the streets were empty and all the radios where on full volume, to hear truth and sanity in an insane and corrupt world.

Here is a man who suffered with and for those who suffered. His loving heart shines through clearly in his homilies:

The shepherd must be where the suffering is. [1]

A Gospel that doesn’t take into account the rights of human beings, a Christianity that doesn’t make a positive contribution to the history of the world, is not the authentic doctrine of Christ, but rather simply an instrument of power. We . . . don’t want to be a plaything of the worldly powers, rather we want to be the Church that carries the authentic, courageous Gospel of our Lord Jesus Christ, even when it might become necessary to die like he did, on a cross. [3]

In his homily on March 23, 1980, the day before he was murdered, Romero addressed the Salvadoran military directly:

Brothers, we are part of the same people. You are killing your own brother and sister peasants and when you are faced with an order to kill given by a man, the law of God must prevail; the law that says: Thou shalt not kill. No soldier is obliged to obey an order against the law of God. No one has to obey an immoral law. And it is time that you recover your consciences. . . . In the name of God, then, and in the name of this suffering people whose laments rise up to heaven each day more tumultuously, I plead with you, I pray you, I order you, in the name of God: Stop the repression! [4]

The next day, following his sermon, a U.S.-supported government hit squad shot him through his heart as he stood at the altar.

Only a few weeks earlier, Romero had said:

I have often been threatened with death. I must tell you, as a Christian, I do not believe in death without resurrection. If I am killed, I shall arise in the Salvadoran people. I say so without boasting, with the greatest humility. . . . A bishop will die, but God’s church, which is the people, will never perish. [5]

Romero’s epitaph reads “Sentir con la Iglesia” (“To be of one mind and heart with the Church”); these words were his episcopal motto, his promise to share the suffering and strength of the people he served.

One thought on “Richard Rohr – Persecuted for My Sake (Oscar Romero)”