UPDATE: On Wednesday, June 13th, at 2pm, Toronto time, my dear friend Don Posterski went to be in glory with Christ and the saints. May he rest in peace!

I met Don for the first time in early 2000, just a few months after I joined World Vision, to work in the Middle East and Eastern Europe Region (MEER), as Director for Faith & Development (F&D – the sector of which Don was in charge in WVI, earlier called Christian Impact – CI, and then Christian Commitments – CC)). Soon after that, he invited me to join him in the WVI Commission on the Church, which, due to Don’s wisdom and his ability to lead a team of very diverse and hard headed members, was the most significant initiative in which I was involved in my 20 years in WV. I wish I had a picture from any of those significant meetings, but I do not. Therefore, I will try to compensate (over)illustrating other events.

Later that year, in October, I invited Don to join my team in Sinaia, Romania, for the first regional event of our sector, called the Christian Life Conference. There, the main speaker was Jim Houston, who taught on Christian Discipleship, while Don taught on building church partnerships, Tim Dearborn taught on witness to Jesus Christ and I taught on spiritual formation. It was a great event, which participants remember fondly, almost 18 years later. Again, Don gave the measure of his unique leadership style, by keeping himself in the background and encouraging others to serve with their gifts. (Again, sadly, I lost all pictures from that event.)

The first global event of our sector, in which I met the other regional directors, was organized by Don in Oxford, UK. It was low key and interactive; we bounced many ideas, and we slowly glued as a team. Of course, Don was the coagulating factor. In the picture below you can see part of our team surrounding Don, with Harold Segura, our Latin American colleague, literally ‘at the masters’s feet’.

Oxford, UK. Some of the ‘old guard’ is there. Harold,
Daniel, Gordon, Saphir, among others

And, since Don was around, even if he is a Protestant and an Anglo-Saxon, it could not be continuously ‘work, work, work’, not even just ora et labora, but also some fun. In this, the boss was again the ‘shepherd of the flock’, as you can see below (in fact, for reasons of discretion, I only illustrate our way to fun, not the fun itself, which will remain undisclosed).

You see Don smiling in these pictures and this could make you think that he is always this irenic person, but he is also a person of convictions and he can put up a fight, if needs be. You can see this in the next picture, taken at a meeting of the Christian Formation Working Group (an unjustly forgotten WVI initiative of Rev. Roberta Hestenens). It took place at Mater Dolorosa, a Catholic retreat center in Pasadena, Ca, in 2003.

During the same year, 2003, we had in Dallas a meeting of the Spiritual Enrichment Task Force (not only a weird label for what the entire Christian world calls ‘spiritual formation’, but also the most depressing, disheartening, and inconsequential WVI initiative in which I was  ever involved). In the picture below, you can see Don checking facts, something he constantly tried to do, as much as he was allowed to (and sometimes he was not). However, do not start me on the meanders of the murky world of corporate politics, which Don knew so well to navigate, and saved my skin from it more than once.

With Don, we had a number of amazing F&D global team meetings. One of these was done in my own region, in Lebanon, in 2004. If it’s Lebanon, it’s about excellent food (hence only lunch pictures).

In January 2005, Don organized a consultation for our team in Madrid, Spain. It was not only an opportunity to visit the famous Prado Museum, and, in my case, the splendid medieval city of Toledo, but, more importantly, besides current business, the chance to listen to the wisdom of Samuel Escobar. This event gave Don the opportunity to demonstrate his expertise as director of our awkward ‘orchestra’ (or choir, if you wish), of course under Tim’s careful scrutiny.

Since we have done so well on Latin soil, Don dared to finally invite our choir for a supposedly stunning performance on his home territory, in Toronto.

And, as we did not blow it gloriously, as he was still afraid it might happen (knowing too well the nastiness of the members of his team) he even dared to invite us for lunch in his home. I guess, after this, it was never again. 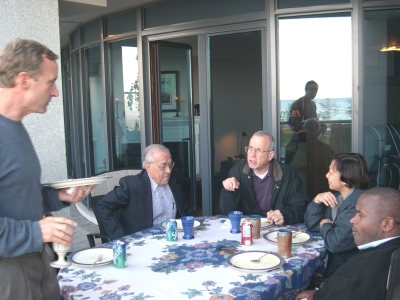 Therefore, to compensate, we decided to cool down at Niagara Falls (again, I will keep discretion on the cooling there).

The last great global F&D event in which I was involved with Don was, I think, the team meeting we had in January 2006, in Senegal. I could never forget that, and not because of Do, but because of my own carelessness. I arrived in Dakar on a Friday evening, unwillingly ignoring the fact that I needed a visa. As a result, while my colleagues enjoyed a refreshing weekend in the hotel by the sea (as you can see Don doing in the picture below), 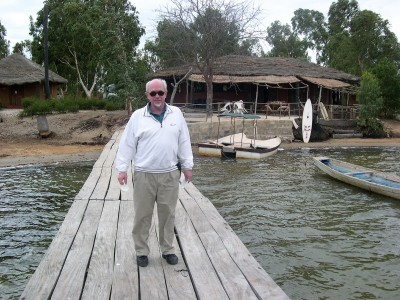 Senegal. Don, on the bridge to a far land

I spent the next almost three days, until Monday evening, in a dirty room of sort of a basic hotel in the airport, with a soldier at the door (the closest I got to imprisonment, after I hardly skipped that ‘privilege’ under communism, in my own country). A few days after being released, with a visa, and in order to really appreciate the graciousness of the authorities in providing it, we were taken to Gorée, to see how people without a visa used to be treated in that place, avowedly, by white people (another argument for the supposed ‘white man’s superiority’). As you can see, even if Tim is not, Don seems really worried of what might have happened to me if it was not for the kindness of the Senegalese.

After we learned the lesson, we were allowed to see the wonderful life that the authorities made possible for their people in the desert area (from the pictures below, neither Silja nor Don looks very impressed; let alone our Senegalese colleagues; it seems they really needed us there, visas or not).

Senegal. Behind Don, in the first picture is Silja, an amazing German lady. Such a pity we lost her because of the foolishness of her National Director

I am drawing towards the end of my stories, but I cannot leave you without another memory, this time from my own region. Kosovo is one of the most troubled political entities in Eastern Europe. It is not anymore a Serbian province, but neither is it a country yet, in the full sense of the word. It witnessed a terrible war and incredible atrocities between the ethnic Albanian majority (mostly Muslim) and the aggressive Serbian minority (mostly Eastern Orthodox). One of the heroes of that place is the young woman in the picture below, together with Don and our colleague Rudy Scholaert.

Her name is Fatmire Feka. She is from an Albanian village south of Mitrovica, the Serbian enclave. She comes from a Muslim family of ten children, the oldest two being killed by Serbian forces. Fatmire, with support from World Vision, organized the Peace Clubs for Albanian and Serbian children in Mitrovica, militating for peace and tolerance in a place that made you feel like you passed through the pit of hell when you crossed the bridge towards the north, over the river, into the city.

It is in the life of such people like Fatmire, that Don made a difference with his love, concern, and passion for the poor and marginalized. Thank you, Don. We love you dearly. Axios!

2 thoughts on “Random Thoughts on My Canadian Friend Don Posterski – May God Rest Him in Peace!”