I just found out that my dear friend Dewi Arwel Hughes went to bee with the Lord. May he rest in peace with the saints!

I met Dewi for the first time in February 2007, at Limuru, in Kenya, in the context of the Lausanne Movement, as we were both called to serve in the Lausanne Theology Working Group, under the leadership of Dr. Christ Wright.

Dewi presented there a paper on ecclesiology and ethnicity, which, as I was going to find out, was one of his lifelong passions. My friend was not a nationalist. Far from it. Nevertheless, he was fully dedicated to the preservation and flourishing of the Welsh language. In 2010, when we met for the last time on this side of eternity, he had with him a young Welsh woman that he was mentoring in this area. I remember how impressed I was by the quality of her presentation during the congress, and how proud was Dewi of her. His interest in the theological implications resulted also in his book Castrating Culture: A Christian Perspective on Ethnic Identity from the Margins, published by Paternoster, in 2001.

Another one of his great evangelical passions was the theology of the poor. It is because of this that he served for many years as theological advisor for the British charity Tear Fund. His reflections on this topic can be found in his books God of the Poor: A Biblical Vision of God’s Present Rule, and in Power and Poverty: Divine and Human Rule in a World of Need.

I May 2008 I have invited Dewi to facilitate the annual retreat of World Vision my regional team, which we organised that year at a monastery in Bolsena, Italy. It was, probably, the most memorable annual event of my team, according to my team members, and, believe me, the competition was tough, with retreats organised in the Holy Land, around the painted monasteries in Romania, and many such special places.

during the break, in the cloister

Dewi came with his wife, Margret, who was a very discreet and joyous presence at our event. Dewi did great, even if, as a Welsh evangelical, he was not necessarily ‘at home’ in such a diverse ecumenically group of people, including Anglicans, Eastern and Oriental Orthodox, Catholics, Melkites, and only a few evangelicals. Yet, he was gracious with us all, and the devotional times he has facilitated were enlightening for all of us.

I will never forget the times spent in biblical reflection in the cloister of the monastery, and the long hours of personal meditation and prayer spent in the garden of the monastery, which overlooked the medieval city and the lake of Bolsena (the largest volcanic lake in Europe).

the Italian cook and his beautiful Romanian assistant

We laughed a lot around the meals served by the beautiful young Romanian assistant of our funny and talented Italian cook, called Enzo, in the garden, at noon, and in the refectory, in the evening. Pasta was heavenly (and I am not at all a pasta lover, unless it is cooked by an Italian), and the local wine was fabulous. 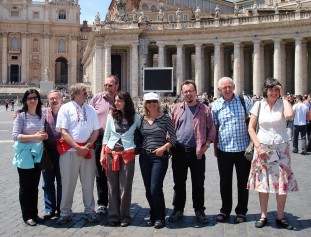 On the weekend, we visited the Vatican, guided by our dear Polish friend Tadeusz Mich. I often looked at Dewi during this visit. I was wondering what does he, as a non-ecumenical (I do not think he was anti-) Welsh evangelical of all this display of astonishing ecclesial power. He never said anything, nor did I dare to ask. 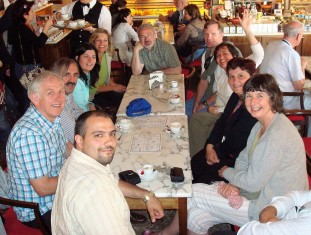 For sure, he was much more comfortable when we visited the catacombs and when, on Sunday, which happened to be the day of Pentecost, we worshipped at the cathedral in Assisi, and we spent a few hours at the more modest place called San Damiano, one of St. Francis’s s favourite places.

My World Vision colleagues reminded me for years about this retreat, and Dewi was one of the most important reasons for it.

In the years since then we only had a few skype calls. I was hoping that someday I would be able to visit him in Wales. It was not to be. Yet, Wales will not be the same without him.

It is tough to say good-bye to such a special friend. However, as Christians we live with the hope of resurrection. Rest well, my friend, in the embrace of Christ. I am sure your prayers will continue to surround us, even more so now.

Let me end this tribute with a Celtic prayer:

If you want to know a bit the man Dewi was, you could read HERE and interview on his book Power and Poverty and below you may watch a video on his ministry with Tear Fund.