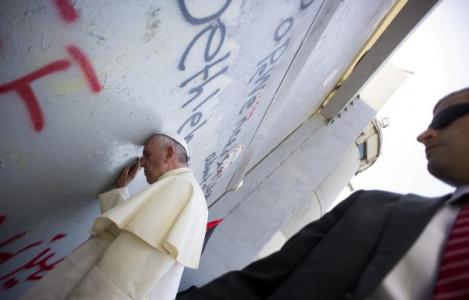 Pope Francis at the Apartheid Wall in Palestine

As we meet this month in Bethlehem in occupied Palestine, we are still suffering from 100 years of injustice and oppression that were inflicted on the Palestinian people beginning with the unjust and unlawful Balfour declaration, intensified through the Nakba and the influx of refugees, followed by the Israeli occupation of the West Bank including East Jerusalem and Gaza and the fragmentation of our people and our land through policies of isolation and confiscation of land, and the building of Jewish-only settlements and the Apartheid Wall.

We are still suffering because of one political declaration from a Western Empire, based on a twisted theological premise. Even some churches and few Christian leaders supported the establishment of the colonial state in our land, and totally ignored – even dehumanized – the nation, our people that had already existed here for centuries and paid the price for atrocities committed in Europe.

Hundred years later with thousands of lives lost, towns and villages razed from the face of the earth – though not our memory –, millions of refugees, thousands of homes demolished and continued incarceration of prisoners, our Nakba goes on.

Hundred years later and there is still no justice in our land! Discrimination and inequality, military occupation and systematic oppression are the rule. Today, we stand in front of an impasse and we have reached a deadlock. Despite all the promises, endless summits, UN resolutions, religious and lay leader’s callings – Palestinians are still yearning for their freedom and independence, and seeking justice and equality. Humanly speaking – we have reached the “moment of impossible”, as Emeritus Latin Patriarch Sabbah said recently.

Could it be that we have reached this “impossible moment” because things were built from the very beginning – a hundred years ago – on an unjust premise? Should we expect that such an unjust declaration will create anything but strife and destruction?

Today is also an opportunity to remember the Amman Call which was proclaimed ten years ago. We are thankful to those who stood with us back then in costly solidarity; those who stood for truth and justice. We are also concerned that ten years later the situation has been worsening on on the ground and still deteriorating. Like other initiatives advocating end of occupation, the Amman Call did not achieve its goals in building and achieving just peace and we must ask ourselves today – why?

We are also concerned by Israel’s systemic assault on Palestinian creative resistance, and on our partners worldwide who use this method to pressure Israel to end the occupation. Many new laws were issued in Israel and around the world to oppose this creative non-violent resistance unlawfully, and to stop all effort towards peace. Not only is this an attack on the freedom of conscience and speech but it is also an assault on our right and duty to resist evil with good. Israel is even now trying to prevent pilgrims from visiting Bethlehem – the city of Emmanuel!

While we are grateful for the ‘costly solidarity’ articulated in the Amman Call and exercised by many churches around the world, we are concerned that some churches have weakened their positions in the last ten years as a result of this manipulating pressure. Many still hide behind the cover of political neutrality, not wishing to offend their religious dialogue partners.

Finally, we meet in an environment of religious wars and persecution in our region. Religious extremism is on the rise, and religious minorities have paid a heavy and painful price. We thank you for your efforts towards the refugees and towards ending the conflicts in our region. We also thank you for your support of persecuted Christians in places like Iraq and Syria.

“God blesses those who hunger and thirst for justice, for they will be satisfied.” (Matthew 5:6)

“Blessed are those who are persecuted because of righteousness (Justice), for theirs is the kingdom of heaven. Blessed are you when people insult you, persecute you and falsely say all kinds of evil against you because of me”. (Matthew 5:10-11)

As we stand in front of this “impossible moment”, it gives us no pleasure to say that “we told you so” eight years ago when we declared the moment as a Kairos moment! We stand facing the impossible, but we have not lost hope, since as followers of the Risen One, we are the people of hope. However, we need you and we need you now more than ever. We need your costly solidarity. We need brave women and men who are willing to stand in the forefront. This is no time for shallow diplomacy Christians. We urge you to hear our call and adopt the following:

As faithful witnesses, we acknowledge, affirm and continue the long standing prophetic tradition, especially the one started by the Amman Call and articulated in the Kairos Palestine document. We fully grasp the pressure church leaders are facing here and abroad not to speak the truth, and it is because of this that we are raising this call.

Things are beyond urgent. We are on the verge of a catastrophic collapse. The current status-quo is unsustainable. This could be our last chance to achieve a just peace. As a Palestinian Christian community, this could be our last opportunity to save the Christian presence in this land. Our only hope as Christians comes from the fact that in Jerusalem, the city of God, and our city, there is an empty tomb, and Jesus Christ who triumphed over death and sin, brought to us and to all humanity, new life.

We are hard pressed on every side, but not crushed; perplexed, but not in despair; persecuted, but not abandoned; struck down, but not destroyed. (2 Cor. 4:8-9)

Network of Christian Organizations in Bethlehem