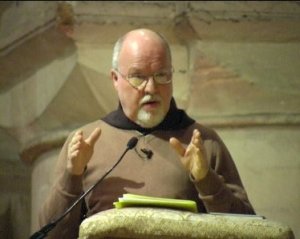 Jesus’ teachings seem to have been understood rather clearly during the first few hundred years after his death and resurrection. Values like nonparticipation in war, simple living, and love of enemies were common among his early followers. For example, the Didache, written around AD 90, calls readers to “share all things with your brother; and do not say that they are your own. For if you are sharers in what is imperishable, how much more in things which perish.” [1] At this time, Christianity was countercultural, untouched by empire, rationalization, and compromise.

However, when the imperial edict of AD 313 elevated Christianity to a privileged position in the Roman Empire, the church increasingly accepted, and even defended, the dominant social order, especially concerning war, money, and class. Morality became individualized and largely sexual. Formal Christianity slowly lost its free and alternative vantage point, which is probably why what we now call “religious life” began, and flourished, after 313. People went to the edges of the church and took vows of poverty, living in satellites that became “little churches,” without ever formally leaving the big church.

If you look at texts in the hundred years preceding 313, it was unthinkable that a Christian would fight in the army. The army was killing Christians; Christians

In the thirteenth century, the Franciscans and the Dominicans were the Catholic Church’s debating society, as it were. We invariably took opposing positions in the great debates in the universities of Paris, Cologne, Bologna, and Oxford. Both opinions usually passed the tests of orthodoxy, although one was preferred. The Franciscans often ended up presenting the minority position in those days. I share this bit of history to show that my understanding of the atonement theory is not heretical or new, but has very traditional and orthodox foundations. In the thirteenth century the Catholic Church seemed to be more broad-minded than it became later. Like the United States’ Supreme Court, it could have both a majority and a minority opinion, and the minority position was not kicked out! It was just not taught in most seminaries. However, the Franciscans and other groups taught the minority position.

Thomas Aquinas and the Dominicans agreed with the mainline position that some kind of debt had to be paid for human salvation. Many scriptures and the Jewish temple metaphors of sacrifice, price, propitiation, debt, and atonement do give this impression. But Franciscan teacher, Blessed John Duns Scotus (c. 1266-1308), who founded the theological chair at Oxford, said that Jesus wasn’t solving any problems by coming to earth and dying. Jesus wasn’t changing God’s mind about us; rather, Jesus was changing our minds about God. That, in a word, was our nonviolent at-one-ment theory. God did not need Jesus to die on the cross to decide to love humanity. God’s love was infinite from the first moment of creation; the cross was just Love’s dramatic portrayal in space and time.

Scotus built his argument on the pre-existent Cosmic Christ described in Colossians and Ephesians. Jesus is “the image of the invisible God” (Colossians 1:15) who came forward in a moment of time so we could look upon “the One we had pierced” (John 19:37) and see God’s unconditional love for us, in spite of our failings.

The image of the cross was to change humanity, not a necessary transaction to change God—as if God needed changing! Scotus concluded that Jesus’ death was not a “penal substitution” but a divine epiphany for all to see. Jesus was pure gift, and the idea of gift is much more transformative than any idea of necessity, price, or transaction. It shows that God is not violent, but loving.

Duns Scotus firmly believed that God’s perfect freedom had to be maintained at all costs. If God “needed” or demanded a blood sacrifice to love God’s own creation, then God was not freely loving us. Once you say it, its inherent absurdity is obvious! Unfortunately, the mainstream “theory” led many people to dislike and mistrust “God the Father.” This undercut the mystical, transformative journey for most Christians.

Jesus was not changing the Father’s mind about us; he was changing our mind about God—and thus about one another too. If God and Jesus are not violent, punishing, torturing, or vindictive, then our excuse for the same is forever taken away from us. This is no small point! And, of course, if God is punitive and torturing, then we have full modeling and permission to do the same. Does this need much proof at this point in Christian history?

Jesus’ full journey revealed two major things: that salvation could have a positive and optimistic storyline, neither beginning nor ending with a cosmic problem; and even more that God was far different and far better than the whole history of violent religion had up to then demonstrated. Jesus did not just give us textbook and transactional answers, but personally walked through the full human journey of both failure and rejection—while still forgiving his enemies—and then said, “Follow me” and do likewise (see John 12:26; Matthew 10:38). This is the crucial message of nonviolence that most of Christianity has yet to hear. Without it, the future of humanity is in grave peril.