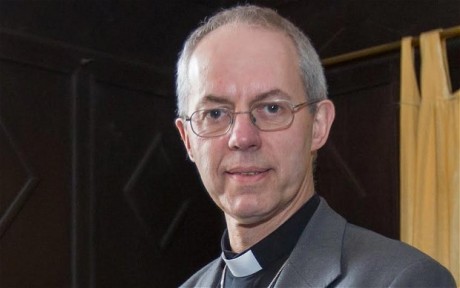 This is ‘not a time to fear’ but a time to trust God, the Archbishop said in the opening speech of Synod’s debate on the EU referendum today.

The Archbishops of Canterbury and York added the item as urgent business to the Synod agenda, with the members’ consent.

Read the full text of the speech:

The length of the EU referendum campaign, the high turnout and the clarity of the result means, it seems to me, that whatever our view of what we would have preferred, we must now deal with the world as it is, and seek not merely survival after Brexit – if we were one of the 48 – but the common good, the flourishing of all our citizens and the seizing of the opportunities offered to our nation; above all to witness to the Kingdom of God.

The referendum result was a huge event (either for good or bad, depending on your view – but, in any case, huge). Earlier this week the House of Lords debated a full two days – a very unusual event – on the referendum outcome. As the debate went on – and I sat through much of it and spoke towards the beginning – it became clearer and clearer how big an event it is. We think of the economic aspects and other aspects, but there are also aspects around civil aviation and numerous other areas. It seems to me to be clear that although we will leave the EU two years after the Article 50 notification has been given, in all probability, the impact and the legislative programme that will follow will keep all of us occupied well beyond that period – in fact beyond the active service of most of us at this Synod.

Although it would be easy to be either utopian, or cataclysmic and apocalyptic, I think that Synod would be deeply mistaken to veer in either direction. I want to look at the context in which we find ourselves, and then raise some challenges that lie before us.

It is perfectly clear that the result and the referendum campaign exposed deep divisions in our society, of which we were aware already. They are especially complex because they are divisions, in part, about our identity as a nation, whether in England or other parts of the UK. And identity is always more difficult to deal with than issue-driven politics.

A key issue was around the questions of integration – integration of those who have migrated here, either very recently or over the last two or three generations; but also integration within the different parts of our society. And in mentioning that it is also important to mention the question of integration of those of our citizens who live within the European Union. The Bishop in Europe, Bishop Robert, will talk more about that in a few moments, I suspect. We need to remember that we have over two million anxious expatriates outside these shores. We also have an equivalent number of residents in this country who feel fearful and rejected, many of them with very, very good reason.

The result has released a latent racism and xenophobia in all sectors, and challenges the prevailing consensus of tolerance and acceptance, thus threatening other areas of welcome liberalisation. And, as I said, we are going to face a period of profound uncertainty.

One of the greatest uncertainties is when and what is the effect of an Article 50 notification to the European Union that we intend to leave: whether it’s ever reversible, should we choose to do so, or whether, once given, that’s it; and how we negotiate during that period.

Faced with such uncertainty, which will face us economically, socially, spiritually and every other way, I want to put before the Synod three challenges and a conclusion.

The challenges are this. Alastair Campbell famously said to Tony Blair: “We don’t do God.” Well, I trust that the Church of England, and in particular this Synod, will in this debate, and in the many that will follow it on the consequences of the referendum and the outworkings of that, give sufficient evidence to the world to be convinced of [us] doing God a great deal.

To do God means not to accept fear as the decisive force in our thinking, although we need to be real about its effects on us and the effects of insecurity. The eternal God is our refuge and underneath are the everlasting arms. God is Lord of history and sovereign in events. We are in His hands.

He raised Jesus Christ from the dead. He gives us the Holy Spirit to equip us to live as God’s people in all times and circumstances. Paul reminds us that nothing can separate us from the love of God. The Psalmist brings troubles and victories and lays them before God.

This is a time for remembering the authority and power of God, revealed in Jesus Christ, and of the good news that we have in our hands for all people in this land. All round the world Christians suffer and yet trust. We can do no less. We are to be led by our theology, which must define our politics, our fears and our hopes.

Greater equality seeks the common good, and opens opportunities for aspiration in all households. The shock of Brexit must be one that forces us into a juster and a fairer society, and a more equal one.

If we are going to do that, we must renew our commitment in the areas of education, the fresh vision for education that has recently come to us. We must develop a workforce that is capable not only of using trade deals but of trading under them. We must recognise that we are going to have to be agile, educated and have that agility and education based in values in a way that we have never had to before – and those values best come through the Christian education that we offer.

We need to renew our commitment to public health, to mental health, to housing. Those areas which in the 19th century and in the late 1940s we led the country, with great courage and determination. We need to address integration vigorously and with courage. We cannot allow the fifth richest economy on earth saying it cannot afford to help the poorest people on earth.

We need a forward foreign policy that is based in development and love for the poor, those caught in conflict and suffering around the world.

The outbursts of the last two weeks may pass, but the signal has been set at danger for our cohesion, and the Church must respond with a fresh effort in integration.

Lastly, a conclusion. The clearest inspiration to those outside the church, the best way we will communicate, the way we bring hope in anxious times, is to be a holy community, and one which is recognised in its conduct as manifestly holy.

That must mean that we keep the needs of the poorest in this country and around the world at the front of our minds. We must manage our own disagreements, whether over sexuality or other matters, with transparent love and delight, and not with words and actions that discredit the hope of unity. And we must be renewed in joyful and boundless love for each other and neighbor – expressed in action, shown in worship and prayer.

These years of uncertainty that we face before us are a moment for the church to rise in its witness, confident in its saviour, honest about its faults and committed to the truth of the gospel. This is not a time for fear.