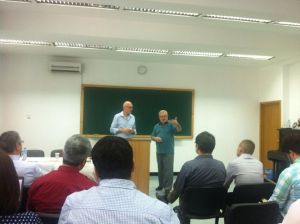 Paris is where a long trail of blood and tears, meandering through the centuries and from continent to continent, has now stopped — for a brief while.

The Islamic State has taken the responsibility for the 129 dead and more than 350 injured, almost 100 of them seriously. In Paris as in many other places, the hands that pulled the triggers of Kalashnikov rifles and pulled the fuses of bombs to kill the innocent people belonged to men and women in whose hearts burned the fires of religious zeal.

Religion, it would seem, breeds violence. Far from being great, God might be thought terrible.

In a globalized world, the terror of God’s crazy-eyed followers is threatening lives, peace and prosperity of everyone on the planet. We are tempted to conclude: The sooner that humanity either eradicates or quarantines off religion, the better our world will be. This conclusion would be too hasty, however.

First, if the hope for the world depends on eradication of religion, we should all despair. Religions are in fact growing in absolute and relative terms. In 1970, there were 0.71 billion unaffiliated or non-religious people, while in 2050, there will be 1.2 billion. That’s impressive growth, until you compare it with the projected growth of religions.

Between 1970 and 2050, the number of Hindus is projected to grow from 0.43 to nearly 1.4 billion, the number of Muslims from 0.55 billion to 2.7 billion and the number of Christians from 1.25 billion to 2.9 billion. And due to the immense popularity of the democratic ideal, religious adherents are becoming increasingly politically assertive.

It is impossible to eradicate or quarantine religion. Any attempt to do so would result in far more bloodshed than religious people have perpetrated throughout their long histories.

Second, many are mistaken about the relationship between religion and violence. Critics argue that religions are inherently violent for three main reasons.

For most religions, the distinctions between true and false religion, justice and injustice, and good and evil are central. Each religion insists on the goodness of the way of life it promotes, rejecting other ways of life as imperfect, misguided or even wicked.

Also, most world religions are based either on positive revelation (Moses, Jesus or Muhammad) or on spiritual enlightenment (Buddha or Confucius) granted to foundational figures. Reason stops at some point, critics object, and gives way to mere conviction, so all world religions are marked by irrational certainty.