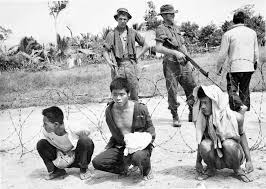 Let’s reflect on the war that lasted almost 30 years and killed more than 3 million of Vietnamese on both sides communist and non-communist. In this short paper, I’d like to present the general understanding of the majority of the Vietnamese people who are both victims and ultimate witnesses of the war that was primarily “brothers killing brothers” – rather than the war that was imposed upon them by foreign powers. Here are very briefly some main points :

I – The war started already in the Summer of 1945, right after the Vietnamese communists had the power in hand at the defeat of the Japanese in Asia. In two years 1945 – 1947, the communist forces had systematically liquidated all non-communist elements all over different parts of the country – that’s in the North, Central and South Vietnam.

In the North, most of the Đại Việt and Quốc Dân Đảng elite members were killed – the best known being Ly‎ Đông A, Trương Tử Anh, and Khái Hưng the famous writer etc…

In the South, most of the Trotskysts like Tạ Thu Thâu, Phan Văn Hùm, Trần Văn Thạch etc… as well as the founder of the Hòa Hảo Buddhist sect Hùynh Phú Sổ were killed.

In the Central particularly about 3,000 Cao Dai were killed in Quảng Ngãi in September 1945, together with about 3,000 other non-communists – this was the most atrocious mass killing right in the first 2 months of the Vietnamese Communists having the power in their hands.

Until 1945, both communists and non-communists were equally repressed by the French colonialist authorities – they were in the same prison and did not have any thing of hatred/resentment whatever one against another. But right away, when the communists had the power in their hand, this merciless liquidation of the “potential antagonist elements” was practiced all over the country.

These massive and almost simultaneous killings could not be simplicistically attributed to the fanatical lower local agents. But the main reason for this “preventive elimination of political opponents” should be precisely found in the Komintern theory of “the Violent Revolution” – as devised by supreme leaders such as Stalin and Mao Tse Tung.

III – This fratricide war was further aggravated, escalated in the context of the ever widening global cold war – especially since the victory of Communist China over the Kuomintang regime (in late1949) and the Korean War (1950 – 53).

There were however some misunderstandings to be clarified concerning the right cause of the Self-Defence of the Non-Communists against the brutal attack from the Communist side. Since 1949, the Bao Dai nationalist regime was established and gradually consolidated thanks to the patient and skilful dealing with the French government. And “the non-communist survivors” have rallied under this “nationalist government” in order to carve out a lebensraum for their own safety. And since the partition of the country in 1954 following the Geneva Agreement, the Ngô Đình Diệm government continued the “nationalist regime’ in the South with due legitimacy.

Certainly there was too much division/conflict between different factions/pressure groups inside South Vietnam – culminating with the overthrow of the Ngô Đình Diệm regime – that ineluctably led to the inevitable weakening of the nationalist ranks and the final collapse of the South government in 1975.

Since the reunification of the country under the communist totalitarian dictatorship, the Vietnamese people in general have had no more illusion whatever about the “liberation” or “socialist paradise” as profusely promised by the communist leaders during the long war. But this is distinctively another chapter of our recent postwar history that needs not to be discussed here in this short paper./

(Published with the kind permission of the author. With a simple search on his name, you will find mpre text by this author on my blog.)

Doan Thanh Liem is a Vietnamese constitutional law scholar. In 1992, he was sentenced in a secret trial to 12 years of imprisonment for “anti-socialist propaganda.” Doan Thanh Liem was released in 1996 and allowed to emigrate to the US with his family. George McGovern and many congressmen wrote letters to Hanoi on his behalf, and one petition was signed by Ed Asner, Daniel Berrigan, Noam Chomsky, Jane Fonda, Frances FitzGerald, Tom Hayden, Seymour Hersh, Ron Kovic, David Rabe, Oliver Stone and Cora Weiss.
(Source, HERE.)