This blog post was prompted by a recent text written on his blog by my virtual friend Carson Clark, who argued, controversially, as he often does, that ‘it seems to him’, ‘Christians need to stop affirming the centrality of the cross’.

I propose a substitution. Instead of the “centrality of the cross,” I suggest the “centrality of Christ”–all of His story recorded in the New Testament, including His incarnation, life and ministry, crucifixion, resurrection, and ascension as well as His anticipated Second Coming. Surely the Bible’s entire redemptive narrative points to, culminates in, and centers on Jesus.

On his Facebook wall, Carson invites me and our common virtual friend Charles Twombly, to comment on this, and also includes in the discussion John Stott’s book The Cross of Jesus Christ and his relationship with Orthodoxy.

Here is my response. After a short comment on James R. Payton’s book Light from the Christian East. An Introduction to the Orthodox Tradition, I write:

Returning to your initial discussion on the evangelical ‘centrality of the cross’. I have to say I fully agree. Let me translate here what I have written on my blog on my own theological identity (the text there is in Romanian and I have never translated it; maybe I should). What I do there, among other things, is to present modified definitions of Bebbington’s four descriptions of evangelicalism. Here is how I redefine crucicentrism.

Trinitarian Christocentrism – a theology rooted in the reality of the Holy Trinity, made accessible to us in the person of Christ, the son of God – fully God and fully human, who was revealed to us through his incarnation for us in history, through the virgin Mary; through his sinless life; through his sacrifice in our place on the cross; through his resurrection which overcame death; and through his ascension, which made possible the coming of the Holy Spirit, through whom Christ is ever present in and with us,in order to sanctify and transform us, as members of his mystical body, the Church, according to his image.

I admit it is quite convoluted, but, as you can see, my main contention is that the entire work of Christ, the Son of the Father, from his incarnation in the power of the Spirit, to the sending of the Spirit following his ascension – not just the redemptive sacrifice on the cross – should be at the centre of our theology.

Charles responds too to Carson’s invitations, commenting on Stott:

Danut knew “Uncle John” better than I did (being one of his “boys”), but we’re both strong admirers, I’m sure. Stott must be measured in terms of his time: he worked within the limits of his experience (as we all do).

While studying theology at Cambridge, he basically skipped the lectures and studied on his own since he was out of sympathy with many of his teachers. A shame in a way, since CH Dodd and Charles Moule were among them.

Eastern Orthodoxy wasn’t on his radar, I’d guess, even though there was a thriving interchange between Orthodox and Anglicans in England in those days, represented most especially by the Fellowship of St Alban and St Sergius.

Interestingly, Michael Harper (a one-time curate of Stott’s at All Souls) moved on to be a major leader in Britain’s charismatic movement and then moved on again, years later, to become an Antiochean Orthodox and prominent in the “move East” of Brits and others. Not sure Stott paid much attention to either of these.

I think he had the “English disease” when it came to theology. Despite his great book on the cross, his interests and reading were almost wholly exegetical (as represented by the books in his study, which I examined–see next paragraph). Historical or systematic theology was not high on the priorities list.

My most precious memory of him was the forty-five minutes he gave to me in ’73 when I visited his townhouse and discussed with him my possible call to the “priesthood” (a term he didn’t like). He is a great hero to me, though I’ve moved in different directions.

I must confess I have the same feelings as Charles for ‘uncle John’. I have great respect and admiration for him, but I have moved theologically in a quite different direction than him.

Here is what I have added, in response to Charles’s comments:

Yes, Charles, as a Langham scholar, I had the undeserved privilege to meet uncle John a number of times in my life, twice of these in his home close to All Souls in Langham Place, which was my church during my theological studies. 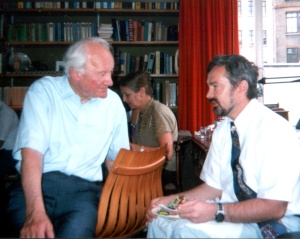 Talking with uncle John is his office

The first time I have visited him together with another Langham scholar, my friend Silviu Rogobete, who wrote his PhD on Staniloae’s ‘ontology of love’.

The second time I have visited uncle John with another dear friend, the Orthodox Fr. Stelian Tofana, the most important Romanian Biblical scholar, who was supported financially by John Stott to spend two months at Tyndale House in Cambridge. One Sunday, since I was myself working on my doctorate at London School of Theology, uncle John suggested that I should bring Fr. Stelian to meet with him.
Besides these visits, I have listened to him many times preaching, both in Romania, before the fall of communism, and after, when I translated for him during his visit at Emmanuel University in Oradea, where I was teaching, and many other times at All Souls.

I was always fascinated with his sermons. He impressed me as a person who was coming from the presence of God – that is what I would call a prophet. He was clear, warm and confident in his sermons. When he preached at All Souls, the church was absolutely full – sanctuary, balconies and the hall downstairs.

I must confess I was never attracted by his books. They seemed to dry to me compared with his live sermons. I think he could have done better with a less stiff editor (whoever that was).

Although he was very knowledgeable theologically, uncle Stott never pretended to be more that a Bible teacher. I tend to agree. This was not a statement of humility (although he was a very humble man), but one of reality.

I never got the impression that Stott was interested at all in Orthodox theology or, as Charles rightly says, generally in systematic or historical theology. We all have our blind spots, don’t we?