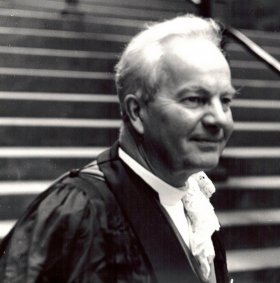 2013 marks the centenary of the birth of one of the greatest theologians of the twentieth century, Thomas F. Torrance, an orthodox, ecumenical, and pastoral theologian. Although he held many academic and ecclesial credentials—including a doctor of theology degree under Karl Barth, several honorary doctorates, co-editor with Geoffrey Bromiley of Barth’s Church Dogmatics, author of dozens of books, Chair of Ecclesiastical History and then of Christian Dogmatics in New College at the University of Edinburgh, co-founder of the Scottish Journal of Theology, and Moderator of the General Assembly of the Church of Scotland—he considered his primary calling to be a minister of the Gospel and an evangelist to theologians. Modern western theology, he believed, has been trapped in an obsolete, dualist mindset that detaches Jesus Christ from God, worship and mission from Christ, and biblical and theological study from fellowship and communion with the living God.

Torrance’s sense of mission, formed by his experience as the child of a missionary family in China, guided him throughout his career. As a chaplain during World War II, he came across a young soldier, scarcely twenty years old, who was mortally wounded. “Padre,” he asked Torrance, “Is God really like Jesus?” Torrance assured him, “He is the only God that there is, the God who has come to us in Jesus, shown his face to us, and poured out his love to us as our Savior.” As he prayed and commended him to the Lord, the young man passed away.

A few years later, one of his parishioners in Aberdeen, a dying, elderly lady asked him the same question: “Dr. Torrance, is God really like Jesus?” That this doubt arose from among believers within the Church itself troubled Torrance deeply. He wondered how the Church distorted its message and created obstacles for its members that kept them from joyous participation in communion with the living God that was theirs in Christ by the Spirit.

Read the rest of this article in First Things.

4 thoughts on “Todd Speidell – What Scientists Get, and Theologians Don’t. About Thomas F. Torrance”