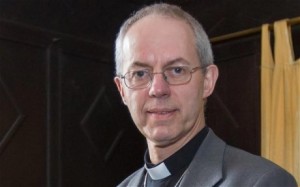 During the recent visit to Iasi of Rev Canon Michael Bourdeaux, a retired Anglican minister from Oxford, and former head of Keston College – the Centre for the Study of Religion and Communism, I have found out something I did not know about the head of my church, Justin Welby, the new Archbishop of Canterbury.

Rev. Bourdeaux told me that when he was young, Justin Welby visited Romanian twice, smuggling Bibles secretly into the country with a double sided van.

I have done a little bit or research and here is what I have found out.

Rev. Andrew Atherstone, the author of the unofficial biography of the new archbishop, called Archbishop Justin Welby: The Road to Canterbury, declared the following in an interview for Oxford Mail:

“The best part of my research was digging up that he was a Bible smuggler in Eastern Europe in the early 1980s,” he said.

“He was recruited by the Eastern European Bible Mission and travelled around Romania during the Ceausescu regime.

“The camper van he was travelling in had Bibles hidden beneath false floorboards and as they travelled about he handed out the contraband Bibles.

“It was amazing to find this out by reading about it in parish magazines.”

An article published in The Times, on 6 March, and quoted by The Spectator, says:

Welby and his wife ‘volunteered as a young couple to brave the secret police of communist Europe by smuggling Bibles’, adding, intriguingly:

‘The newlyweds were provided with a camper van by the Dutch-based East European Bible Mission for their trips to Czechoslovakia and Romania. Secret compartments and a false floor hid the biblical contraband. The Welbys were taught to memorise maps and code words so that they could meet underground Christians clandestinely. They were warned of the danger of informers and secret police trying to foil them. They were trained in techniques to resist interrogation in case they were caught’