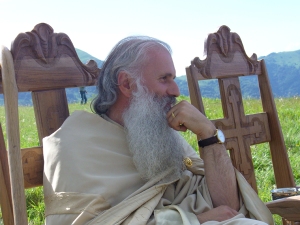 Millions of people have been grieved by the bombing in Boston. I suppose I am one of them. No, I have never been to Boston. I do not have much connection with the city. I don’t think I know many people there either. For various reasons I think my grief is threefold.

It grieves me to think of the innocent people who have been affected by the attack. The feeling of loss is almost tangible. Those who died will never grow old, will never be able to materialize their hopes and dreams. Those who loved them will never get over the pain of bereavement. I too lost my son a few years ago, and I think I know what I am saying. The physical wounds of those who were wounded in the attack will be eventually healed but their emotional wounds might mime them mentally forever. In our (Eastern) liturgical calendar it is still a Lenten season. We fast and pray during this season. Every Friday we come to our church and observe the day of the crucifixion. I wish it was only remembrance what happened on the Calvary two thousand years ago. But the pain of the crucifixion is still so real in the world we belong to. Sadly we hear every day that our fellow human beings are being ‘crucified’ as a result of injustice, wars, military and terrorist attacks. Bostonians have also been ‘crucified’ very much like other peoples in Afghanistan, Iraq, Syria. The difference is that we are sadly accustomed to hear about death tolls from less powerful and fortunate countries than America. I need to offer my condolences and deep sympathy to all those who have been ‘crucified’ both in Boston and everywhere. Crucifixion is not the end of the story. There is a hope beyond it, the hope of Easter. Which will wipe the tears of the suffering and grieving not in the eschatological future but here and now.

It also grieves me when I think of the wasted lives of two young people who were responsible for the bombing. I am deeply saddened that they are originally from Chechnya. The Muslim country which has suffered incredible oppression and humiliation by ‘Christian’ Russia. For the last couple of decades one fifth of Chechen population have been eliminated by troops who had been blessed for the mission by the Orthodox Christian clergy. Political Christianity was confronted by political Islam in Chechnya. Chechnya is our neighbouring country. Historically Chechens and Georgians have been enemies. Our enmity was heightened by their religious difference as Muslims and Orthodox Christians respectively and also by the brutality committed by Chechens in recent wars in Georgia. When the refugees fled Russia during the brutal cold winter we responded specifically in response to the teaching of Jesus to love our enemies. We carried emergency supplies to the refugees and cared for them over a long period of time. We were engaged in all sorts of medical, educational, artistic and social projects in their refugee camps. Rather unexpectedly friendship and love grew between us and the Chechen refugees. We could not help it. In 1999 before the New Year we asked Chechen children to write down for us what their dreams for the New Year was. We received hundreds of little stories written by the war children. Some of them will stay with me for the rest of my life. One twelve years old Muhammad wrote:

“My dream is to die in fighting against Christians.” Then he realised that it was the Georgian Baptist Christians who looed after them and then he changed his mind. He crossed the word ‘Christian’ and wrote on the top of it ‘Russians.’ This little child managed to distinguish between political and religious Christianity. It happened only because they had seen and experience Christian love and care. The two boys who were responsible for Boston bombing have come from the same background. They belong to the same Muslim nation which had been deeply offended by ‘Christian’ state, if one could call Russia or any other countries Christian. But unlike our little Muhammad, they failed to tell the difference between political and religious Christianity. I am very sad about it, but not at all surprised; this is what Christians are also doing: they can not tell the difference between political and religious Islam.

It grieves my heart when I think that what has happened in Boston will cause yet another wave of hatred towards our Muslim brothers and sisters both in the USA and beyond. We will never know how many innocent Muslims will be humiliated, hurt and abused as a result of the violence in Boston. This will only help the representatives of political Islam to recruit more people. This should be stopped.

All the security services of the world, police and military forces may try their best but I am afraid they can not stop hatred and fear. Love, forgiveness and kindness can! In my country Muslims have been continuously humiliated. After one of recent incidents we went in a sizable delegation to Batumi region where majority of Georgian Muslims live. In this delegation we had some Georgian Baptists, American Baptists (ABC) led by Rev Roy Meddley and British Anglicans led by Bishop Stephen Platten. We refused to stay in a hotel. We went to stay at Muslim families instead. We had dinner with our Muslim hosts, breakfast, next morning and by the lunch time we found out the Muslim perspective on Christians and Christian perspective on Muslims had dramatically changed. We became friends. Encounters and hospitality must be one of the keys to break the walls of separation. A few days later I received a letter from the head of the Georgian Muslim community thanking me for the visit and also saying that ‘it was first time he experienced genuine respect and love from representatives of non-Muslim clergy.’ At first I felt flattered by this message but then I realised that it should not be taken as a complement. This man who must be in his fifties has spent most of his life, half a century, without ever experiencing respect from Christian clergy, office holders of the religion of love! I think this is disastrous. The Berlin wall came down in 1991 but the wall of separation between Christians and Muslims is still very much up there. Unlike the Berlin wall, it is not tangible it is solidly built with the mortar of fear suspicion and hatred. It is built in our hearts and minds. Good news is that the walls ultimately will come down. Blessed are those who participate in its demolition.

Crises like the Boston bombing can possibly help us to transform the crises into creative process of peace building. I would particularly like to urge my fellow clergy men and women in the USA to make their best in channelling this crises into discovery of true meaning of religion. It is ironic that in theory Christianity is a religion of love and Islam is a religion of tolerance. We need to rediscover these theoretical constructs from the treasury of our faith traditions.

In Georgian tradition there is a poem of a Tiger and a Young Man which was recorded in the highlands of my country. In the poem a young and beardless hunter who bumped into a tiger in the rocky mountain range. In the fierce battle both the tiger and the young man fell. The mother is of the young man is bitterly mourning the death of her son. She is tormented in her nightmares. She can not find peace until a strange thought crosses her mind. She starts thinking of the tiger’s mother who has also lost her son and says:

“Perhaps the tiger’s mother grieves
And mourns her dead son with a louder lament;
Perhaps her heart is bursting now
With sobs that rend the firmament.
So quickly will I go to her
And strive to soothe her sorrow deep.
She’ll proudly tell me of her child,
I will tell her of mine,
And we in common grief will weep.”

I wonder if this is the way we should find peace with ourselves and with others: looking at ourselves with the eyes of perceived strangers and enemies and ‘weeping in common grief. Perhaps we should also mourn together the needless deaths of those who were brutally killed and those who were responsible for their killing. I know this is not easy but who said that healing of the wounds of our crucified planet is going to be easy!?

One thought on “Malkhaz Songulashvili – Threefold Grief of Mine. A Letter to My American Friends”