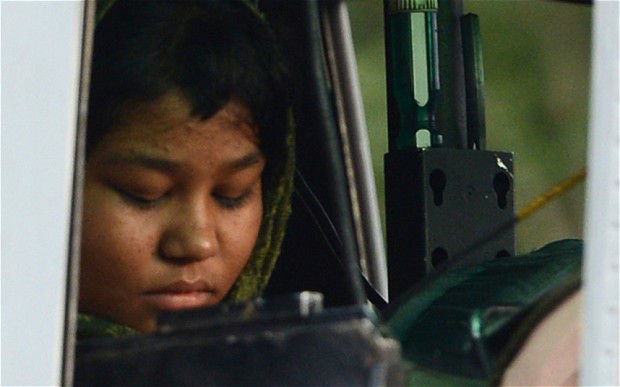 London, Jan. 16 (World Watch Monitor) — The Pakistan Supreme Court on Tuesday threw out an appeal to reopen a blasphemy case against a 14-year-old Christian girl, who had been accused of burning verses from the Koran.

Rimsha Masih had been acquitted of the charges in November by the High Court in Islamabad. A Muslim cleric was subsequently charged with fabricating evidence against the girl. The lower court’s decision was appealed to the nation’s highest court.

One of the girl’s lawyers, Thahir Naveed Chaudhry, confirmed the Supreme Court’s rejection of the appeal to World Watch Monitor. Separately, Federal Minister for National Harmony Paul Bhatti told Asia News he was satisfied with the decision of the Supreme Court confirming “Rimsha Masih is innocent.”

According to Vatican Radio, the minister said these were “days of stress and tension” but “justice had prevailed”. Bhatti is the brother of Shahbaz Bhatti, the government Minorities Minister who was assassinated for calling for reform of Pakistan’s anti-blasphemy law.

Although Rimsha was 14 at the time of her arrest last summer, her developmental age is said to be lower. Some reports say she has Down syndrome and has never received an education.

Prior to Tuesday’s ruling, Vatican sources said the decision to appeal at the Supreme Court may have been taken for political reasons to appease fundamentalists ahead of the parliamentary elections later this year.

Fr. Mario Rodrigues, director of the Pontifical Mission Societies in Pakistan, told the Vatican information service, Fides: “On the one hand there is the political manipulation of Rimsha’s case; on the other hand there are some mullahs who insist. Moreover, there is a right to lodge an appeal.”

Rimsha was arrested Aug. 16 after being accused of burning pages on which were printed verses from the Koran, a violation of Pakistan’s anti-blasphemy laws. The girl, who lived in Meranabadi, a poor Christian district outside Islamabad, was held for three weeks in an adult prison in Rawalpindi, before being released on bail in September.

After being granted bail, Rimsha had to be airlifted by police helicopter to avoid an angry mob. She went into hiding with her family for fear that extremists would take revenge, whatever the outcome of the court decision.

According to Christian relief organisation LEAD, dozens of poor Christian families fled the neighbourhood of Meranabadi after blasphemy charges were brought against Rimsha. They say fear returned to the neighbourhood when it was learned Rimsha’s case was being brought back to the Supreme Court.

Though Rimsha now is legally free, Christian lawyers say she and her family have no future in Pakistan, where their lives will always remain at risk. Others who have been acquitted of blasphemy have been assassinated by militants taking the law into their own hands.

The case against Rimsha was thrown out by the High Court in Islamabad in November, after Chief Justice Iqbal Hameed-ur Rehman cited the lack of witnesses to support the allegation.

The case against Rimsha collapsed after the police were informed the cleric of the mosque in Rimsha’s area had planted the evidence against her. The cleric has been named as Khalid Chishti.

News agency Agence France-Presse said his deputy, Maulvi Zubair, reported to the police that Chishti had added pages of the Koran to papers Rimsha had burned. Citing police sources, AFP says Chishti’s deputy warned the cleric not to interfere with the evidence, but Chishti replied, “You know, this is the only way to expel the Christians from this area.” Police arrested the imam on suspicion of tampering with the evidence and desecrating the Koran.

Pakistan Lawyers say Rimsha’s acquittal is unlikely to result in a change in Pakistan’s blasphemy laws, which critics say are routinely abused to settle scores and take revenge. However, religious liberty campaigners say they hope the case will set a precedent for the way future blasphemy allegations are investigated.

Chief Justice Rehman warned blasphemy charges should only be brought with caution because of their sensitivity. Campaigners hope the court’s remarks will have a positive bearing on other outstanding cases, including that of Asia Bibi, the first Christian woman to be sentenced to death on blasphemy charges.

But Fr. Mario Rodrigues told the Vatican’s Fides service that “the abuse of the blasphemy law, such as Rimsha’s case, continues while the country is crossed by a worrying spiral of violence.”

Pakistan’s blasphemy laws have been in the spotlight since January 2011, when Punjab governor Salmaan Taseer was shot dead by his own bodyguard after calling for reform to the blasphemy law. Two months later, Minorities’ Minister Shahbaz Bhatti, a Roman Catholic, was also assassinated, after campaigning for the blasphemy law to be changed.

World Watch Monitor is distributed to raise awareness of Christians worldwide who are persecuted for their faith. Articles may be reprinted, with attribution, by active subscribers only.

You may also read about this in The Telegraph.