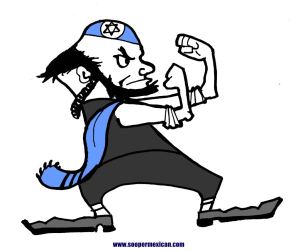 I’m writing on a bus that is touring the edges of Jerusalem and thus the contested boundaries with the West Bank. But you don’t want to hear about that, believe me.

So let’s get to something even less pleasant. Last night as I was walking back from a pleasant dinner at the Anna Tico House I dropped by our local grocer to buy a bottle of arak. As I approached the counter I heard the Israeli Jewish clerk raise his voice, and proceed to be rather ugly to an elderly American Jewish couple because they asked for directions. He extended his, ‘you ignorant Americans’ to a diatribe about how America enslaves people and he hopes it is utterly destroyed. I was surprised, since the US is at least Israel’s best friend and possibly its only friend. So I asked, as one should, a local interpreter. And got an earful.

It turns out that there is a perception that rich American Jews are buying up all the prime Jerusalem property. Whole apartment buildings, I was told, were owned by Americans who only visit a couple of weeks a year. This drives up property prices and badly exacerbates a desperate housing shortage. (Remember the 5 people who have immolated themselves?) Hence this anti-Americanism isn’t so much a political protest against US policy. It is anti-Americanism based on the a strong negative reaction to American economic power, and particularly that of wealthy American Jews who use Israel for religious holidays but aren’t perceived to have a real stake in its survival. Or so I was told. In any case it isn’t a universal feeling, but is apparently held by some Israeli young people who are in a desperate situation economically and feeling that their government is far more interested in relations with the US than their problems.

Also bear in mind, well over a million Israelis come from a deep background of anti-American discourse in the old Soviet Union, much of which was swallowed whole and then added to the local issues with the US.

And (however you feel about it) I was told that Obama got off on the wrong foot with Israelis. In short, I hear, he was perceived to have demanded a certain concession in negotiations that moved the US from being a broker in the negotiations to being a pro-Palestinian participant.

The land: To even begin to understand the issues here you need to get on the ground physically. We’ll leave out the Jordan river valley for now. The border between Israel and the Palestinian territories is a range of complex and often precipitous hills between the costal plain (fertile) and the Jordan Valley (desert). Distances are short. From the ocean to the Jordan river is 40 miles, and that includes the coastal plain, the hill country, Jerusalem and the West Bank. The hill country in which Jerusalem sits consists of steep rocky hills with villages on top and roads in the valleys. Some hills are not inhabited, but many have some sort of village or community on top. These communities are sometimes Palestinian villages or towns, sometimes neighborhoods of Jerusalem (either Jewish or Palestinian but rarely mixed), sometimes suburbs of Jerusalem or suburbs of Tel Aviv and other coastal towns that are Jewish settlements in the West Bank. Don’t imagine that settlement means a small bunch of trailer homes full of radical zionists. Imagine whole planned communities of modern town homes and apartments with thousands or tens of thousands of middle class inhabitants who commute to work.

(An aside. Those old enough will remember when “integration” of neighborhoods and schools was the ideal, and segregation was bad. Here in Israel the reality of segregated communities is taken as the norm, and indeed reflective of what humans naturally want and should have. “Integration” is regarded by many, perhaps most including those on the left, as foolish and undesirable. The problem isn’t how to integrate neighborhoods, but how a group of segregated neighborhoods can share city services that regulations that cut across neighborhood boundaries.)

Anyway, looking from above you see a patchwork of villages and towns and planned cities, apparently randomly mixed Palestinian and Jewish, with roads down below in a complex network. And you have a big problem – although these roads necessarily cross each other and merge and divide to follow the terrain, the Israeli military wants to make sure that Palestinians only have access to Palestinians and Israelis only with Israelis, and of course to protect all possible border crossings on a complex, hilly, border. The sometimes security fence sometimes security wall (it varies) has pretty much solved this latter problem, but of course cuts off adjacent hills (and thus related villages) in many places.

And notice I haven’t even talked about the “green line” that runs along the internationally accepted border and/or line of demarcation. Many Jewish suburbs/settlements are on the Palestinian side.

In any case the first natural border of the Eastern Mediterranean is the hill country itself, not a line through it.That border land was traditionally inhabited by all the sorts of marginalized people that live in a country where quick escapes are necessary and there are plenty of places to hide. As a border region it was great. Drawing a border through this country is far more problematic, because there is no natural border running through the hill country.

And note the multiple strange narratives. The non-Jewish Arab people who traditionally inhabited the area of Israel and the Palestinian territories had no political identity until half a century ago. But based on the mandate to rule “Palestine” given to Britain in the early 20th century their current leaders now claim a retroactive right to rule the whole area in which their “people” lived. On the other hand there hasn’t been a Jewish political presence since the time of King Herod, but current Jewish leaders claim a right to rule the whole area based in part on the historic claim of Jews on Judea, Samaria, and Galillee, in part on their own UN mandate to part of “Palestine,” and in part on the right of conquest and security.

But mostly just notice how small it all is, and how the terrain insures that owning the top of any one hill potentially threatens half a dozen other hills and a stretch of the coastal plain. Security a plenty for a dozen or more tribes in the bronze age, and security for nobody in the rocket age.

But I’m off now to Tel Aviv.