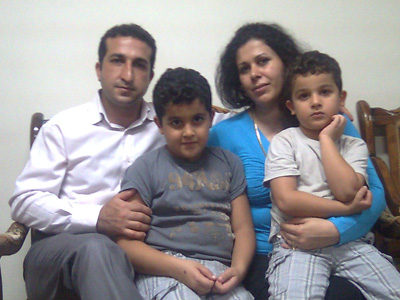 Pastor Youcef Nadarkhani, an Iranian pastor sentenced to death for apostasy in September 2010, refused to recant his faith during four court hearings held on September 25-28. He now faces an imminent verdict of the death sentence, which is expected to be issued within seven days. “They probably won’t kill him today, but they can do it whenever they want,” a source said. “Sometimes in Iran they call the family and deliver the body with the verdict.”

In July, the Supreme Court instructed the Revolutionary Tribunal of Gilan Province to review Youcef’s case to verify whether he was previously a practicing Muslim (for more information, click here). At the recent hearings, the court in Rasht ruled that Pastor Youcef was not a practicing Muslim before becoming a Christian but that he remains guilty of apostasy because of his Muslim ancestry.

Please pray for continued strength and grace for Pastor Youcef. Pray that all charges against him will be dropped. Pray that Pastor Youcef will rely on the Lord to give him the words to say when he stands before accusing authorities (Matthew 10:19). Pray that Iranian authorities will act justly in this case.

A source in Iran has shared that it is critical for foreign governments to negotiate and engage in diplomacy with Iranian authorities about Nadarkhani’s case, adding that Youcef’s predicament could be more hopeful if they intervened.

(Source, Voice of the Martyrs, Canada)

Here is a statement of the White House about this matter (source, HERE):

“Pastor Nadarkhani has done nothing more than maintain his devout faith, which is a universal right for all people,” Carney said. “That the Iranian authorities would try to force him to renounce that faith violates the religious values they claim to defend, crosses all bounds of decency, and breaches Iran’s own international obligations. A decision to impose the death penalty would further demonstrate the Iranian authorities’ utter disregard for religious freedom, and highlight Iran’s continuing violation of the universal rights of its citizens.”

Please remember Pastor Youcef Nadarkhani in your prayers and also pray for his persecutors that his testimony will make them see the light.

Here is a letter sent last year from prison by Pastor Nadarkhani (he was arrested on 12 October 2009):

In the Name of our Lord Jesus Christ, I am continuously seeking grace and mercy to you, that you remember me and those who are bearing efforts for his name in your prayers.

Your loyalty to God is the cause of my strength and encouragement.

For I know well that you will be rewarded; as it’s stated: blessed is the one who has faith, for what has been said to him by God, will be carried out.

As we believe, heaven and earth will fade but his word will still remain.

Dear beloved ones, I would like to take this opportunity to remind you of a few verses, although you might know them, So that in everything, you give more effort than the past, both to prove your election, and for the sake of Gospel that is to be preached to the entire world as well.

I know that not all of us are granted to keep this word, but to those who are granted this power and this revelation, I announce the same as Jude, earnestly contend for the faith that was once delivered to the saints.

We are passing by special and sensitive days.They are days that for an alert and awake believer can be days of spiritual growth and progress. Because for him, more than any other time there is the possibility to compare his faith with the word of God, have God’s promises in mind, and survey his faith.

Therefore he (the true believer) does not need to wonder for the fiery trial that has been set on for him as though it were something unusual, but it pleases him to participate in Christ’s suffering.

Because the believer knows he will rejoice in his glory.

Dears, the “ judgment must begin at the house of God: and if it first begin at us, what shall the end be of them that obey not the gospel of God? And if the righteous scarcely be saved, where shall the ungodly and the sinner appear?”

Therefore those who are enduring burdens by the will of God, commit their souls to the faithful Creator. Promises that he has given us, are unique and precious. As we’ve heard he has said: “Blessed are they which are persecuted for righteousness’ sake: for theirs is the kingdom of heaven. Rejoice, and be exceeding glad: for great is your reward in heaven: for so persecuted they the prophets which were before you”

How can it be possible for a believer to understand these words?

Not only when he is focusing on Jesus Christ with adapting his life according to the life Jesus lived when he was on earth? As it is said ” O fools, and slow of heart to believe all that the prophets have spoken: Ought not Christ to have suffered these things, and to enter into his glory? And it is easier for heaven and earth to pass, than one tittle of the law to fail.”

Have we not read and heard: Because strait is the gate, and narrow is the way, which leadeth unto life, and few there be that find it. Many attempt to flee from their spiritual tests, and they have to face those same tests in a more difficult manner, because no one will be victorious by escaping from them, but with patience and humility he will be able to overcome all the tests, and gain victory.

Therefore in the place of Christ’s followers, we must not feel desperate, but we have to pray to God in supplication with more passion to help us with any assistance we may need.

According to what Paul has said: In every temptation, God himself will make a way for us to tolerate it.

O beloved ones, difficulties do not weaken mankind, but they reveal the true human nature.

It will be good for us to occasionally face persecutions and abnormalities, since these abnormalities will persuade us to search our hearts, and to survey ourselves.

So as a result, we conclude that troubles are difficult, but usually good and useful to build us.

Dear brothers and sisters, we must be more careful than any other time.

Because in these days, the hearts and thoughts of many are revealed, so that the faith is tested.

May your treasure be where there is no moth and rust.

I would like to remind you of some verses that we nearly discuss everyday, (Our Father in heaven, hallowed be your name, your kingdom come, your will be done on earth as it is in heaven.) but as long as our human will has priority over God’s will, his will will not be done.

As we have learned from him in Gethsemane, he surrendered his will to the father, “My Father, if it is possible, may this cup be taken from me. Yet not as I will, but as you will.”

What we are bearing today, is a difficult but not unbearable situation, because neither he has tested us more than our faith and our endurance, nor does he do as such. And as we have known from before, we must beware not to fail, but to advance in the grace and knowledge of our Lord and Savior Jesus Christ, And consider these bumps and prisons as opportunities to testify to his name. He said: If anyone is ashamed of me and my words, the Son of Man will be ashamed of him when he comes in his glory and in the glory of the Father and of the holy angels.

As a small servant, necessarily in prison to carry out what I must do, I say with faith in the word of God that he will come soon.”However, when the Son of Man comes, will he find faith on the earth?”

Discipline yourself with faith in the word of God. Retain your souls with patience. For there is no man that doeth any thing in secret, and he himself seeketh to be known openly.

May you are granted grace and blessings increasingly in the name of Lord Jesus Christ.