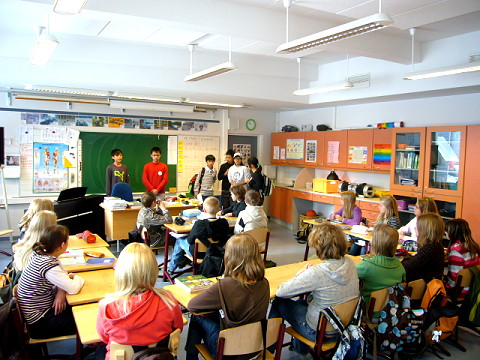 According to education columnist Linda Fandel, the reasons why schools in Finland are considered the best in the world (see HERE) are:

All this, according to Fandel (see HERE), could be summarised by three words: Relationships, Engagement, Student Centred.

Scot McKnight was pointing us recently to a very good article on this topic. Here are a few quotes:

Finland has vastly improved in reading, math and science literacy over the past decade in large part because its teachers are trusted to do whatever it takes to turn young lives around.
…
“This is what we do every day, prepare kids for life.”
…
Many schools are small enough so that teachers know every student. If one method fails, teachers consult with colleagues to try something else. They seem to relish the challenges. Nearly 30 percent of Finland’s children receive some kind of special help during their first nine years of school.
…
“Children from wealthy families with lots of education can be taught by stupid teachers,” Louhivuori said, smiling. “We try to catch the weak students. It’s deep in our thinking.”
…
The transformation of the Finns’ education system began some 40 years ago as the key propellent of the country’s economic recovery plan. Educators had little idea it was so successful until 2000, when the first results from the Programme for International Student Assessment (PISA), a standardized test given to 15-year-olds in more than 40 global venues, revealed Finnish youth to be the best young readers in the world. Three years later, they led in math. By 2006, Finland was first out of 57 countries (and a few cities) in science.
…
There are no mandated standardized tests in Finland, apart from one exam at the end of students’ senior year in high school. There are no rankings, no comparisons or competition between students, schools or regions. Finland’s schools are publicly funded. The people in the government agencies running them, from national officials to local authorities, are educators, not business people, military leaders or career politicians. Every school has the same national goals and draws from the same pool of university-trained educators. The result is that a Finnish child has a good shot at getting the same quality education no matter whether he or she lives in a rural village or a university town. The differences between weakest and strongest students are the smallest in the world, according to the most recent survey by the Organization for Economic Co-operation and Development (OECD). “Equality is the most important word in Finnish education. All political parties on the right and left agree on this,” said Olli Luukkainen, president of Finland’s powerful teachers union.
…
“We prepare children to learn how to learn, not how to take a test.”
…

Teachers in Finland spend fewer hours at school each day and spend less time in classrooms than American teachers. Teachers use the extra time to build curriculums and assess their students. Children spend far more time playing outside, even in the depths of winter. Homework is minimal. Compulsory schooling does not begin until age 7. “We have no hurry,” said Louhivuori. “Children learn better when they are ready. Why stress them out?”

It’s almost unheard of for a child to show up hungry or homeless. Finland provides three years of maternity leave and subsidized day care to parents, and preschool for all 5-year-olds, where the emphasis is on play and socializing. In addition, the state subsidizes parents, paying them around 150 euros per month for every child until he or she turns 17. Ninety-seven percent of 6-year-olds attend public preschool, where children begin some academics. Schools provide food, medical care, counseling and taxi service if needed. Stu­dent health care is free.
…
Not until sixth grade will kids have the option to sit for a district-wide exam, and then only if the classroom teacher agrees to participate. Most do, out of curiosity. Results are not publicized. Finnish educators have a hard time understanding the United States’ fascination with standardized tests. “Americans like all these bars and graphs and colored charts,” Louhivuori teased, as he rummaged through his closet looking for past years’ results. “Looks like we did better than average two years ago,” he said after he found the reports. “It’s nonsense. We know much more about the children than these tests can tell us.”
…
In 1963, the Finnish Parlia-ment made the bold decision to choose public education as its best shot at economic recovery. “I call this the Big Dream of Finnish education,” said Sahlberg, whose upcoming book, Finnish Lessons, is scheduled for release in October. “It was simply the idea that every child would have a very good public school. If we want to be competitive, we need to educate everybody. It all came out of a need to survive.”
…
The second critical decision came in 1979, when reformers required that every teacher earn a fifth-year master’s degree in theory and practice at one of eight state universities—at state expense. From then on, teachers were effectively granted equal status with doctors and lawyers. Applicants began flooding teaching programs, not because the salaries were so high but because autonomy and respect made the job attractive. In 2010, some 6,600 applicants vied for 660 primary school training slots, according to Sahlberg. By the mid-1980s, a final set of initiatives shook the classrooms free from the last vestiges of top-down regulation. Control over policies shifted to town councils. The national curriculum was distilled into broad guidelines. National math goals for grades one through nine, for example, were reduced to a neat ten pages. Sifting and sorting children into so-called ability groupings was eliminated. All children—clever or less so—were to be taught in the same classrooms, with lots of special teacher help available to make sure no child really would be left behind. The inspectorate closed its doors in the early ’90s, turning accountability and inspection over to teachers and principals. “We have our own motivation to succeed because we love the work,” said Louhivuori. “Our incentives come from inside.”

I hope this was intriguing enough to motivate you to read the whole article.

If this topic interests you, you may watch a documentary called Waiting for Superman, that compares the American and the Finish education systems. The first episode in an eith part series may be watched below. You will find the rest of them on Youtube.

Are you still wondering why schools in Romania (and US public system, for that matter) are such failures? The answer is very simple. They do everything upside down (this is about Romania and only partly about US):

With such teachers and such a system, it is no surprise that many of our students are close to idiotic. If things continue this way, Romania has absolutely no future.