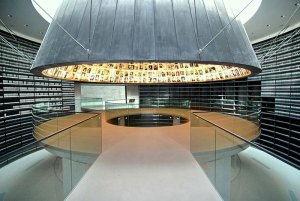 Ethics theologian David Gushee has written for ABP a very powerful reflection following his visit this summer in Israel and the Palestinian territories.

Here are a few significant quotes:

As a scholar, I have long recognized the Holocaust for the grotesque and epochal evil that it was. Before I went to Israel and the occupied Palestinian territories this summer, however, I had little idea how much its memory continues to play a role in the tragic conflict in that land.
…

The basic story told through these displays [at Yad Vashem] is familiar to anyone well-acquainted with the Holocaust, though it seemed to this visitor that Yad Vashem emphasized somewhat more strongly than the United States Holocaust Memorial Museum in Washington the history of Christian anti-Judaism and the Jews’ travail during the era of Christendom. I also sensed a stronger emphasis on the pitiless behavior of European non-Jews while their neighbors were being carted off to death.

From reading about Yad Vashem, I had gathered that rescuers were strongly featured there. Certainly they were honored, both in the garden where Israel honors individual rescuers by name and in a small section of the museum near the end where heroes like French rescuer Andre Trocme are named.

The Holocaust story can be told in a way that such rescuers are pivotal grounds for hope. Some Jewish scholars discuss Christian rescuers this way: “They tried to kill us, but not everyone was evil. There are good people in the world, and some non-Jews can be trusted.”

But at Yad Vashem, rescuers function as a relatively minor footnote in the Holocaust story.
…

After seeing all the terror, abandonment and evil, the visitor ends up at a vast window with a breathtaking view of modern Israel all around. After Holocaust, Israel reborn! Leaving the museum, a large inscribed arch quotes from Ezekiel: “I will put my breath into you and you shall live again, and I will set you upon your own soil.”

It is not too much to say that the only hope at Yad Vashem is the survival of the Jews as a people in the reconstituted modern state of Israel. And, despite the Ezekiel quote, this is not told as a drama of divine redemption.
…

Today Israel does not tell her story like the one found often in the Hebrew Bible: “You were oppressed under the hand of the Egyptians, but your merciful and compassionate God has delivered you. Now you must not oppress the stranger and alien in your midst.”

The Auschwitz-to-Israel narrative moves differently at Yad Vashem… The operative story now goes something like this: “They tried to kill all of us; and they killed our parents and grandparents, our aunts and our uncles, our brothers and our sisters. But we survived as a people, we fought our way into control of our homeland again, and we will never again under any circumstances leave ourselves vulnerable to people who want to kill us. Your job is to be sure that we can keep this promise to our murdered ancestors and to our children’s children.”
…

A Jewish host told our group in Israel that anyone who wants to contribute to a just peace in Israel and Palestine must deal with the fact that the Jewish community is still dealing with a collective case of post-traumatic stress disorder.

Anyone who does not respect the reality of that trauma forfeits entry into meaningful conversation with Israel. This is not the last word to be said. But it is the first word.

2 thoughts on “David Gushee – How Israel remembers the Holocaust”