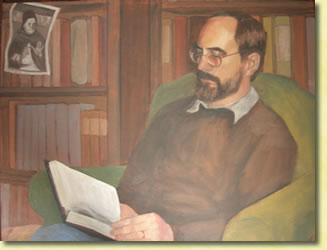 I have published recently HERE a blog post on defining Anglicanism, having as a starting point a blog post by Carson Clark, another Evangelical turned Anglican, like me.

Reacting to some discussions on Facebook around this subject and a fierce attack on Carson Clark by Robin Jordan, and Anglican fundamentalist (yes, there is such a thing as Anglican fundamentalism; the devil continues to disguise himself as an angel of light even among Anglicans, not only on the left – if you know what I mean, but also on the right) – Jordan is the author of the Anglicans Ablaze blog, my colleague Perry Mansfield, another former Evangelical traveling on the ‘Canterbury trail’ recommended me the blog of William G Witt. As you can see in his short life story at the link under his picture, Bill is himself a former Baptist that became an Anglican, mostly in dialogue with Catholicism.

Dr. Witt, who is teaching systematic theology at Trinity School for Ministry in Ambridge, PA, has chosen as his blog motto an adagio from Hillary of Poitiers, De Trinitate, 4.14, saying: non sermoni res, sed rei sermo subjectus est, meaning, approximately, ‘words are subordinated to the event, not the event to the words’. Here is the immediate context of this dictum:

I have found in his blog post titled ‘Evangelical or Catholic?’, to which I will dedicate a separate post, many similarities to my own pilgrimage towards Anglicanism. However, unlike Bill, my trail has intersected more with Eastern Orthodoxy than with Catholicism. I will come back later to this topic, as the text mentioned above is rich and contains many suggestions that might enlighten those interested in this sort of meandering.

Until I attend to this, I recommend other posts on this blog, on two important theological matters:

3 thoughts on “Non sermoni res – An Anglican blog worth exploring”