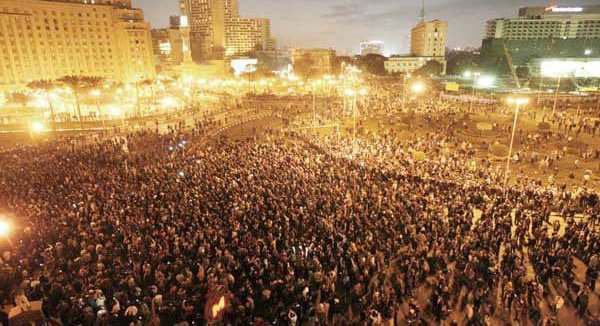 Last night I went outside my neighborhood for the first time in 18 days, to attend a service at my Egyptian church. The church is next to Tahrir Square, and because it is so close to the square it was closed throughout the demonstrations. Yesterday was the first Sunday service in three weeks, and I had the pleasure of translating from Arabic to English for English speaking visitors.

To get to my church from my house, I walk ten minutes to the nearest light rail metro station. The metro trip to Tahrir Square takes about 20 minutes, and I come up out of the exit that puts me in front of the Mugamma building, at the opposite end of the square from the Egyptian Museum.

Last night, the train was moderately crowded, and when I got off in the station below Tahrir Square I saw lots of people carrying Egyptian flags and many others, particularly girls and children, with the three colors of the Egyptian flag painted on their cheeks. When I came out from the station below, there were hundreds of people concentrated in the center of the square. It seemed to me a lot of people, and I wondered what it was like at the height of the demonstrations. I saw banners raised and could hear chants and drumming and in general lots of noise. I walked around the Mogamma and entered the church. I walked up to the translation booth, and a few minutes later the service began.

We praised Jesus Christ saying, ‘You are exalted, higher than any other name.’ Our pastor spoke from Daniel chapter 2 in which God uses Daniel in an influential way in the land of Babylon. He said all Christians are called to be Daniels in the society in which we live. The God of wisdom and might gives knowledge and understanding to those who seek his face, who allow faith and love to overcome fear and reach out in boldness, confident in the God who reveals deep and hidden things and changes the times and seasons.

Many members from my church spent a lot of time in Tahrir Square during the demonstrations. They say that among the demonstrators close-minded fanaticism, hatred, discrimination and selfishness were noticeably absent. Several times they led the crowds in songs of praise and had many opportunities to share the reason for the hope that is within them. There is an overwhelming opinion among those who participated that what happened in Tahrir Square is a picture of what could be.

At the end of the service, our pastor asked us to fast and pray for the next three days for the writing of the new constitution.

Last Friday, I saw a short conversation on Facebook between two of my Egyptian Christian friends.

The first friend wrote:
“A NEW ERA…. a new life, dignity to the poor, hope to the Broken hearted…no more their EG, it’s our EG now…OHHHHH GOD let us HOLD this land with responsiblity……….CAN”T STOP CRYING>>>>>>PUSH, WORK !!”

The other commented:
“We need to keep praying. Last phase was critical…the next is dangerous. May GOD lead the writing of the new constitution, the selection of the new parliament, the next elections, the next government. May the military forces put a plan that is sealed by God’s wisdom and values.”

Let us draw near to God, continue to reach out in love, and pray until what could be is eternal.

One thought on “A Message from Cairo”