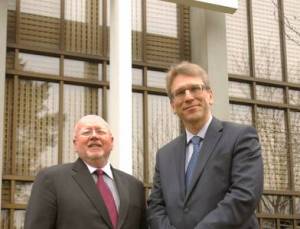 The two met for the first time in 2007 at the Global Christian Forum in Limuru, Kenya. The meeting in Geneva was their first encounter since Tveit began his tenure as WCC general secretary in January.

Tunnicliffe and Tveit discussed areas of common interest and collaboration such as mission and evangelism and the ongoing work on a code of conduct on conversion, which also involves the Roman Catholic Church.

“We affirmed that all Christians have a common call to be one, and that we want to be sensitive to one another’s concerns,” Tveit said of the meeting.

Tunnicliffe said: “This important meeting was helpful in building bridges of understanding in regards to evangelism, religious liberty and caring for the vulnerable. We look forward to ongoing conversations with the WCC.”

The two leaders also affirmed the continued support of the WCC and WEA for the Global Christian Forum as a platform providing opportunities for encounters and dialogue between Orthodox, Catholic, Anglican, Protestant, Evangelical, Pentecostal and the African Instituted Churches.