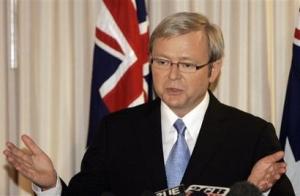 Kevin Rudd is my favourite international politician these days (as you may easily guess, I have no favourite among Romanian politicians). Here are a few reasons for my sympathy;

1. He is the prime minister of Australia and head of the centre-left Labour Party. Although I have always voted for the right, after the aberrations of the Bush jr. era, I find myself much more simpathetic to those of the left of centre.

2. Rudd is also a Christian politician (he worships in an Anglican church) who seeks to apply consistently his Christian values and moral vision in the area of his vocation. He is a politician in the tradition of Tony Blair, another politician I have admired, in spite of his blind support for the  American Republican administration in Iraq.

3. The Australian prime minister is also a man of firm opinions. Yet, even when he makes strong statements, he never falls into the extremist habits of the American Right (be it religious or not).

Rudd became a hero for the islamofobs in the west when he made a series of declarations about the danger of islamism in Australia. Yet, what these people forget is that he never looses the balance and the common sense, even in the heated of debates

Thus, the prime minister was criticised by some for condemning a Muslim cleric for his advise to Muslims to “beat their wives”… as long as they don’t bleed. Commenting on this, The Times writes:

“Australia will not tolerate these sort of remarks,” the Prime Minister told reporters. “They don’t belong in modern Australia, and he should stand up, repudiate them, and apologize.”

Fortunately, “his call for an apology was echoed by Muslim leaders in Australia, who expressed their concern that impressionable young male Moslems would watch Mr Hamza’s video and be influenced by it”. It may not surprise anyone that the cleric never apoloogised.

Kevin Rudd is always backing up his words (even the strongest ones) with deeds that provide the context for their correct interpretation. But about this I will discuss in my next post about Rudd.

9 thoughts on “Kevin Rudd and the islamofobs”