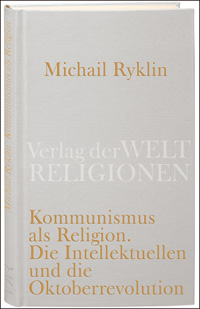 Here is the presentation of the book, which could be found on the web site of the publisher:

The Bolsheviks were inspired by the faith – a kind of secular religion – in the possibility of radically changing their backward feudal society. From the outset, they declared an inexorable war on Orthodoxy, installed a system of communist rites, and produced effective propaganda for the achievements of the new regime. The Lenin Mausoleum became the centre of the Soviet Cult, and still harbours the embalmed corpse of the dead Party Chairman.
In the 1930s, Lenin was deified, the “presumption of guilt” was incorporated in the legal system, and art was obliged to accept a uniform style (that of Socialist Realism) and Soviet patriotism.
When it comes to the power of attraction exercised on intellectuals, no other secular religion of the 20th century can compare with Communism (which Raymond Aron called the “opium of the intellectuals).
The most important task this book sets itself is to elucidate the reasons for this enchantment. What was it about the original revolutionary faith and its culture that seemed extraordinarily valuable, and even unique, to Walter Benjamin, André Gide, Lion Feuchtwanger, Bertolt Brecht and many others?
Mikhail Ryklin outlines the contours of the Communist faith, the mode of function of Communism as religion.

You may find HERE an interview with the author, which contains a good summary of the book.